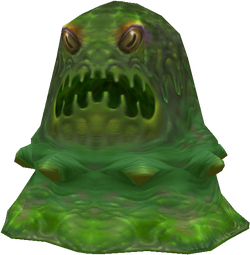 A strange gelatinous creature that is not much of threat itself, but its Acid attack is dangerous because it lowers P. Def.

Slime (スライム, Suraimu?) is a recurring enemy in Final Fantasy. They are usually a green variation of Flan, although Final Fantasy: The 4 Heroes of Light and Bravely Default depict it in blue due to the latter one being a spiritual successor of the former. Their elemental weakness is usually Fire or Earth.

Slime is an enemy which can be found on the northwest edge of the Floating Continent in Final Fantasy III. It is weak to Fire-elemental damage.

Slime is a sub-species of the Amorphs species in Final Fantasy XI.

Slime is an amorph/flan-type enemy encountered in Zertinan Caverns in Final Fantasy XII. This enemy poses little threat to the party unless the player is not quick enough to dispatch it in time and risk in it diving into more Slimes. It is weak to Earth-elemental damage.

Slimes are a recurring enemy separate from the Flans, usually appearing in subterranean instances, sometimes with different names. The second mini boss of Copperbell Mines is highly resistant to physical and magical damage, but can have its mass split apart by luring it into the blast radius of a Bomb's self-destruct, causing it to split into numerous, but progressively smaller blobs until they can be taken down with ease. Of particular note are the infamous Palace Slimes in the second level of floors in the Palace of the Dead which use a self-destruct attack called Rupture that instantly kills all party members within an invisible but large radius, making them top priority to kill.

Slime comes in two variations and can be encountered in the Abandoned Mines in Vagrant Story. Players shouldn't have a problem defeating this enemy.

Slime is an enemy encountered in the Level Forest in Final Fantasy Mystic Quest. This enemy poses little threat to the party. They are weak against bombs, but at the time the party encounters it they have no access to them.

Slime is an enemy which comes in two variants which share the same model in Final Fantasy: The 4 Heroes of Light. The first variant can be encountered in the Liberte area and the Pirate Hideout, poses no threat to the party and can be easily disposed by Fire-elemental attacks. The second variant can be found inside Holy Tree Tower and possess higher stats as well as ability to merge and are weak against Earth-elemental damage.

Slime is an enemy encountered outside Caldisla during the day in Bravely Default. They pose little threat to the party, although its Acid may reduce its opponent's P.Def. by 25%. 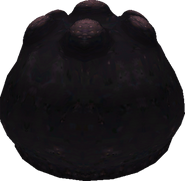 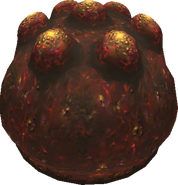 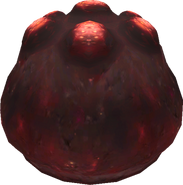 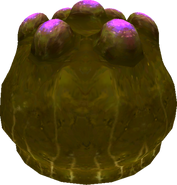 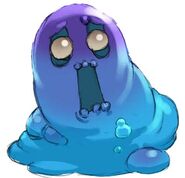 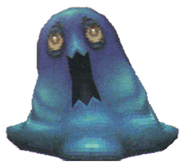