A wide-bladed sword with a midnight blue handle.

Sleep Sword (眠りの剣, Nemuri no Ken?), also called Sleep Blade, Half Moon, Crescent Sword, Slumber Blade and Slumber, is a recurring weapon in the series. It is usually a mid-ranked sword that inflicts the Sleep status when attacking with it. It takes the appearance of a long, curved sword.

A blade that puts foes to sleep.

The Crescent Sword is a low-ranked sword that inflicts Sleep when attacking with it. It provides 30 Attack, 10% Accuracy, and 1% Evasion, and is found on the second floor of the Dreadnought.

Sleep Blade (originally called Slumber) is a mid-ranked sword that can be used by both Paladin Cecil and Kain. It is found in Eblan Castle, guarded by a Steel Golem and three Skuldiers. It has an Attack of 55, Accuracy of 27, and inflicts Sleep when attacking with it. It may also cast Sleep when used as an item. This weapon is metallic.

In the 3D versions, it has an attack power of 55 with an accuracy of 90 with the same properties as the 2D versions. It can be equipped by Cecil and Kain, and Golbez if hacked into the party.

The Sleep Blade is a mid-powered sword, providing 55 Attack, 27% Accuracy, and casts Sleep when used as an item. It can be found in Mist Cliff (Ceodore's Tale), or dropped from Sahagin Knight. It can be equipped by Cecil, Ceodore, Kain, and Golbez.

Half Moon is a mid-ranked sword that can be used by all classes that can use swords. It can be bought in Castle of Bal, Regole, and Quelb for 5,600 gil. It has an Attack of 46, and has a 50% chance of inflicting Sleep when attacking with it.

Crescent Sword is a sword that provides 37 damage and 248 Delay. It deals 8.95 damage per second and accumulates 66 TP per hit. It can be equipped by level 53 Warrior, Thief, Dark Knight, Beastmaster, Ranger, Samurai, and Blue Mage. It is only obtained through synthesis.

Sleep Blade (Sleep Sword in the PlayStation version) is a mid-ranked sword that can be bought during Chapter 2 for 5,000 gil, poached from Squidraken or found with the Treasure Hunter ability as a rare treasure at Grogh Heights. It has 9 Attack, 5% Weapon Defense, and inflicts Sleep when attacking with it.

A bewitchingly-shaped sword with secret magic that puts foes to sleep.

A sword with the ability to put foes to sleep as it strikes. Although its special effect is not always guaranteed to afflict others, the power it exhibits as a long sword makes this weapon easy enough to handle. Unfortunately, however, its sheer size complicates the process of sealing the sleep spell within the blade, making it impossible to produce this weapon in mass quantities. Instead, they can be found in locations such as old ruins, since they seem to originate from ancient times.

Sleep Sword is a Sword obtained by crafting it using 600 gil, x5 Water Crysts, and x7 Mythril Ores, and by finding it at Mobreeze Airship Factory and during the Final Fantasy II event, "The Dreadnought". It provides 35 ATK and has a 30% chance of inflicting Sleep.

A slender sword made from a special metal that emits a sleep-inducing agent when it reacts to blood or body heat. It was originally intended for self-defense, but production was halted after these swords started falling into the wrong hands.

In Bravely Default, Sleep Blade is a sword that provides 27 P.ATK, 90 Aim, and has a 25% chance to cause Sleep. It can be found in the Witherwood or dropped from Bone Knight.

In Bravely Second: End Layer, Sleep Blade is a sword that provides 38 P.ATK, 90 Aim, has a 25% chance to put target to sleep, and deals 50% more damage to demonkind. It can be bought in Sagitta Village for 7500 pg. 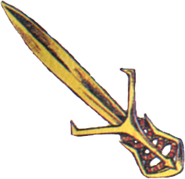 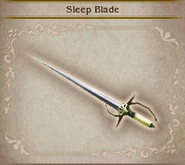 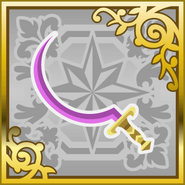 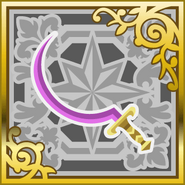