The slave crown (あやつりの輪, Ayatsuri no Wa?, lit. Manipulation Ring), also known as Puppeteer's Wheel, is a device in Final Fantasy VI that allows one to control the actions and thoughts of the wearer.

The slave crown was made by Kefka using magitek technology to directly control the wearer's actions. He had Terra wear it and ordered her to burn fifty of the finest imperial soldiers, which she did. The crown's control abilities are strong enough to render the wearer unable to do anything unless motioned directly to do so. This is evident in Emperor Gestahl's proclamation of war speech, where Terra did not join the other high generals (Kefka, Leo, and Celes) in salute.

She is later ordered to infiltrate Narshe to investigate the appearance of Valigarmanda, a recently dug up frozen esper. Biggs and Wedge, two Imperial soldiers, accompany her, and Biggs questions Terra's loyalty, but Wedge points out the slave crown and assures Biggs she would do what they say. When they reach the esper, it presumably kills Biggs and Wedge and disrupts the slave crown's hold. The crown is later seen in Arvis's possession, a Returner living in Narshe, and it is assumed he destroys it.

The residual effects give Terra amnesia of most of her life until some time later, and it is implied by General Leo that her emotions and feelings were dampened as well. These effects eventually wear off and Terra returns to normal.

Terra's slave crown is the only one seen or mentioned and the reason why more were not put into use is unknown. Arvis refers to it as "a slave crown" in a context he was familiar with its effects and Terra being unusually strong to remember her name so soon after it was removed, indicating there are others. 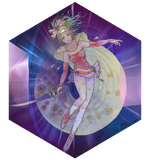 Dissidia Final Fantasy has a unique accessory called "Puppeteer's Wheel" that boosts the amount of time one can sustain EX Mode. Terra wears the accessory in Destiny Odyssey III when fought as an enemy, paralleling the Empire's control of her using the device in Final Fantasy VI. Also, in Dissidia 012 Final Fantasy some cutscenes show a lack of light reflection in her eyes, a gimmick commonly used in Japanese character designs to indicate either possession, hypnosis or trance.

This section about an item in Dissidia 012 Final Fantasy is empty or needs to be expanded. You can help the Final Fantasy Wiki by expanding it.

In dummied data for Final Fantasy VI, during the flashback scene where Kefka places the slave crown on Terra, Terra was originally supposed to struggle and yell "No! Get away from me!", revealing that she was not a willing participant in the procedure.