Flesh and sinew offer no resistance at all to this axe's slender blade.

Slasher (スラッシャー, Surasshā?) is a recurring weapon in the series. It is normally an axe with a decent Attack power, though it is often low-ranked.

Any of Tidus's swords can become the Slasher if its dominant ability is Piercing.

Slasher is a mid-ranked axe that requires 25 LP and the Axes and Hammers 3 license to wield. It provides 71 Attack and 6 Evade, and can be bought for 6,000 gil at Mt Bur-Omisace, Nalbina Fortress, and Rabanastre. Like all axes it has 2.39s charge, and 1.2s action time, making it average when it comes to attack speed.

In the Zodiac versions, it now provides 54 Attack, 6 Evade, 9 CT, 6% combo rate and requires the Axes & Hammers 3 license for 35 LP. it can be bought in Jahara and Mt Bur-Omisace for 4,000 gil, found as a treasure in Giza Plains - The Rains (Gizas North Bank), Zertinan Caverns (Hourglass Basin, Halls of Ardent Darkness) and Ozmone Plain (Field of Light Winds), or dropped by Werewolf (1%). It is also a treasure in Trial Mode Stage 40 (with Diamond Armlet). It can be equipped by the Foebreaker class.

This axe not only has impressive destructive power, but can also slow the actions of its target.

Slasher is the third strongest axe (strongest axe in the original version) and provides 16 Attack. It can be bought for 12,000 gil in Chapter 3 or poached from Minotaur.

Slasher is a low-ranked, one-handed axe that provides 38 Attack and teaches Thundara to Vikings for 250 AP. It can be bought for 1,580 gil in the shop after creating it in the Bazaar after using an Adamant Alloy, Tiger Hide, and Battlewyrm Carapace.

Slasher is a low-level axe providing 31 attack power and is effective against plants.

Slasher is a level 1 axe that provides +6 Attack, -2 Defense, and Wall Rush HP Damage +5%. It becomes available in the shop after it is found on Destiny Odyssey I's fourth map. Once found, it can be obtained by trading 1,000 gil, an Axe, a Protect Shard, and Transmogridust x2. 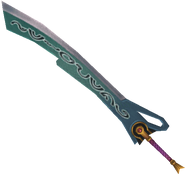