Slapper is an enemy in Final Fantasy VIII found in Galbadia Garden's ice rink. If Squall and the party speak to a Galbadian student in the ice rink locker room during their first visit to Galbadia Garden, the student will make mention of this demi-human team.

Slapper is one of very few enemies without a Triple Triad card. 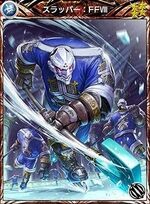 Retrieved from "https://finalfantasy.fandom.com/wiki/Slapper?oldid=3274173"
Community content is available under CC-BY-SA unless otherwise noted.