Airborne craft, developed by the moogles centuries ago. They float by the power of skystone, and are given direction and speed by means of propeller or glossair ring. Currently, they are one of the most popular forms of transport in Ivalice, and the skyroutes are comfortably the busiest of the highways linking the major cities. Airships range in size from private yachts to giant military warcraft. Unable to fly in jagd, where skystone is ineffective.

Skyferries are used as transportation in Final Fantasy XII. When riding skyferries, the player may choose to sleep on the flight via the Private Cabin option or explore the airship via the Leisure Craft option. Skyferries are operated by the East Ivalice Company.

Skyferries can be accessed at the Aerodromes of the following cities:

Two hume attendants sell rare items and magick at the Observation Parlor of any skyferry.

Ann and her Sisters[]

The player needs to talk to seven sisters that work as Chief Stewards aboard the leisure craft airships that connect the largest cities of Ivalice. If the player fails to complete the quest, the seven sisters will be forced into arranged marriages.

To start the quest, the player needs to take the flight via leisure craft from an Aerodrome and talk to Ann, the Chief Steward at the Sky Saloon. Agreeing to help her begins the sidequest, which can be completed after visiting the Balfonheim Port.

The player must ride all the skyferry routes and talk to all the sisters to deliver the letter. After completing the quest, the player will receive the Ring of Renewal for their trouble.

The Mark Deathgaze can be taken up on the skyferries. The hunt is accepted from a boy in the aerodrome and will appear randomly when the player is traveling on a skyferry. When Deathgaze attacks a skyferry with the party onboard, they can go on the deck and fight it, but they can also take their time and talk to the scared passengers. The party can also seek shelter in the cabin. There's seven possible scenarios, depending on which skyferry is attacked.

There are no treasures to be found on the skyferries in the original version.

In the Zodiac versions, there is a secret invisible treasure chest that can be found randomly on the Airdeck of a Skyferry airship. Since the treasure is invisible, the player will only find it if they bump into it. Additionally the hidden chest will only spawn 1% of the time. There is an 80% chance the chest will contain exactly 10 gil. Its normal treasure is nothing but junk Knot of Rusts. However with the Diamond Armlet equipped, it can contain a Knot of Rust, or the Rare Treasure (5% chance), the Seitengrat, a new ultimate bow with the highest attack stat at 224.

Ultimately the odds of finding the Seitengrat are 0.01% or 1 in 10,000. If the player acquires the Seitengrat, an arrow will appear in the sky in the Cerobi Steppe suspended a few feet in the air. 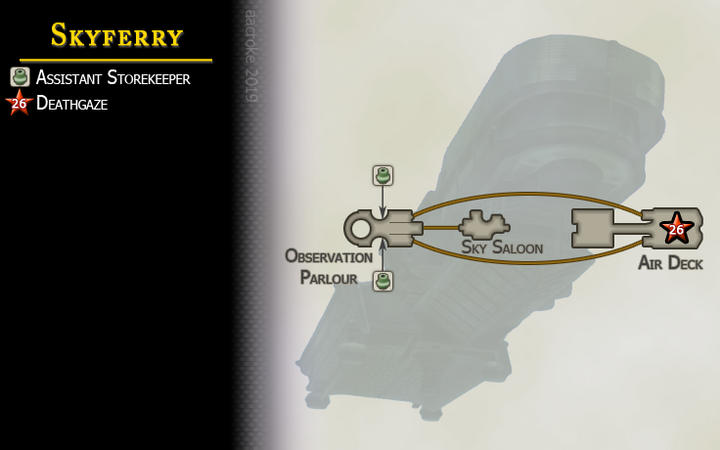 "Heart of a Child" from Final Fantasy XII

The music that plays in the skyferries is called "Heart of a Child". It also appears in Theatrhythm Final Fantasy Curtain Call.