Relm: I couldn't miss the chance to practice my drawing!
This article is in need of a few pictures. Perhaps you can help by uploading a picture of Sky Pirate abilities.

High base attack and HP, low base magick and MP
See stats

Your mistakes were twofold, I'm afraid. You sprung your trap without looking to see if the game you hunted was the one you'd snare. And you sold me short, I'm no thief. I'm a Sky Pirate.

Sky Pirate is a special job in Final Fantasy Tactics: The War of the Lions. It is Balthier's default and exclusive job that focuses on guns. It costs 6,600 JP to master. It is an enhanced combination of the Thief and Machinist jobs, with the Plunder abilities having a higher rate of stealing compared to Steal, while also boasting from superior stats and more equipment options.

A pirate who sails the open sky, free from all laws and obligations. He never lets a mark escape.

Plunder abilities generally have a 10% greater chance of success than normal Steal abilities.

The success rate for Plunder Heart is as follows:

The success rate for all other abilities is as follows:

Amount stolen for Plunder Gil is equal to Speed * Level.

Amount of EXP stolen for Plunder EXP is equal to Speed + 15.

The Sky Pirate is a powerful and versatile special job that combines traits from Machinist and Thief, focused on dealing physical damage with a wide variety of weapons, being able to steal from opponents, and capable to crippling the movement and actions of its foes. Its high stats and equipment options makes it a force to be reckoned with. Its Leg Shot and Arm Shot can easily change the tide of battle, and enable other jobs deal more damage; Dragoons, in particular, can easily hit foes affected by Leg Shot. Balthier is the only playable Sky Pirate (should the player recruit him in The War of the Lions).

Thanks to its versatility, the Sky Pirate can be played as virtually any kind of physical attacker, melee or ranged, as it can equip guns, swords, knives, polearms, bows, and crossbows. The Sky Pirate is the only non-Knight job other than Ramza's Squire and Luso's Game Hunter capable of equipping Knight Swords; the Sky Pirate can deal the most damage in the game by equipping the Chaos Blade and using its Barrage ability, easily dealing over 2000 damage.

To get the most of the Machinist and Thief abilities from the Sky Pirate, improving its speed is key, since all its abilities' success rate depend on Balthier's Speed stat. The Archer's Adrenaline Rush is great in long fights, allowing the Sky Pirate to increase its own speed by +1 whenever taking damage. However, the Sky Pirate naturally has the highest speed growth in the game, vastly superior to any other job. This means the player can invest in other attributes, such as raw attack power.

The Sky Pirate also has second highest physical evasion of all classes, after Ninja, and tied with Agrias's Holy Knight. By equipping it with high evasion shields, cloaks, and the Shirahadori reaction ability from Samurai, the Sky Pirate becomes very hard to hit. 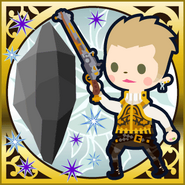 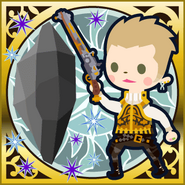 [view · edit · purge]Air pirates, also known as sky pirates, are a type of stock character from science fiction and fantasy. Fictional air pirates typically operate as pirates in the air, or, in general, the atmosphere of a planet, dwarf planet or moon, and travel by aircraft, as opposed to the more traditional pirates on the high seas, who travel by ship.