Skull Warrior is an undead/skeleton-type enemy in Final Fantasy XII found in the Southfall Passage of the Tomb of Raithwall. There will usually be one Skull Warrior wandering around, and when it is approached by the party, one or two Lost Souls will rise from the ground.

Cold bones sheathed in armor forged of a strong alloy, wielding a blade with more skill and more cruelty than any warrior alive. Perhaps all were as skilled in the forgotten past, for this undead creature's bearing, arms, and armor are of an ancient style. Indeed, the skull warrior's skill with a spear illuminates the old ways of war in a fashion more vivid and fearsome than any tome on the subject could hope to effect. Though pale by comparison, even a modern interpretation of the spearman's art is not to be underestimated when employed by a dedicated practitioner.

Hear ye! Announcing a feat of hunting mastery such as the world has never seen! Donatelos the White Mage has trounced all existing records in the annual city gathering of hunters. As you know, each year contestants vie to see who might slay the most creatures designated as that year's quarry. This year's target: the fiendish skull warrior. A tally has been made of broken spears retrieved, and Donatelos has distinguished himself for eternity with an incredible haul of 126! Honor to the champion! 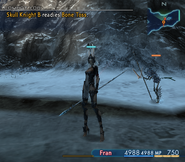 Bone Toss.
Add a photo to this gallery

Retrieved from "https://finalfantasy.fandom.com/wiki/Skull_Warrior_(Final_Fantasy_XII)?oldid=3274093"
Community content is available under CC-BY-SA unless otherwise noted.