Akira Oguro
Skuld Bahamut is a neutral-elemental eidolon that appears in Final Fantasy Dimensions II. It is a stronger version of the Bahamut summon and can only be equipped by Morrow. The summon can be purchased in the Babil Tower exchange shop for 10,000 Babil points.

In the original free-to-play versions of the game it could only be obtained through the summon drawing shop and equipped by any party member.

According to the original Japanese free-to-play version description, Skuld Bahamut is an alternate version of Bahamut that controls the spacetime of the future. Due to this, it appears more mechanical and muscular than the other Bahamuts. In addition, it carries two large satellites hovering above it, serving as a replacement of Bahamut's traditional wings.

The following are the abilities Morrow can learn from Bahamut Skuld: 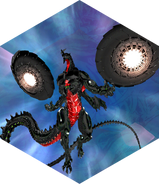 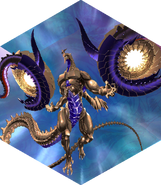 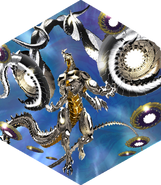 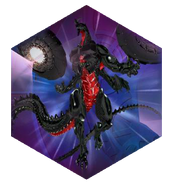 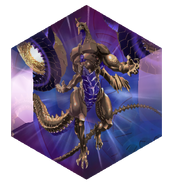 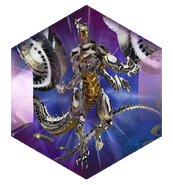 [view · edit · purge]Skuld is a Norn in Norse mythology. Along with Urðr (Old Norse "fate") and Verðandi (possibly "happening" or "present"), Skuld makes up a trio of Norns that are described as deciding the fates of people.