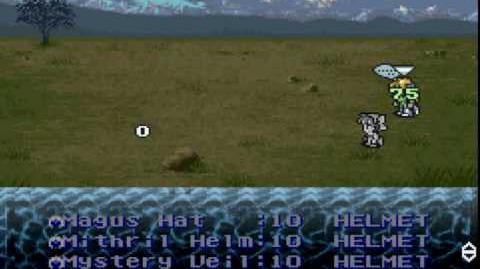 The Sketch bug is a bug from Final Fantasy VI. It is one of the most infamous bugs in the entire series, since it can be easily triggered during normal play and can have a dramatic effect. The bug's trigger occurs whenever Relm misses the target she is supposed to sketch, or when she sketches a difficult to sketch target.

The bug can have various effects, such as filling the player's inventory to the brim with items such as Dirks and Gem Boxes, causing the game to freeze, or erasing all data, although the most common effects are graphical errors and game freezes. The bug is most often seen when trying to sketch enemies with the Invisible status, such as the Intangir or Gabbldegak after it casts Vanish on itself (usually sketching a Gabbldegak leads to the best results). Another variation includes sketching Gau when he reappears in the Veldt.

This bug only occurs the Super Famicom version, the Super Nintendo Entertainment System version 1.0 of the game (a later version, 1.1, was released without the bug) and emulated versions thereof. It does not appear in the Anthology re-release or the Advance port. There is a bugfix patch players can use to fix it on the SNES version.

The bug is caused by a coding error that causes the game to try to load data from the wrong place. When Relm fails a Sketch, the game will still try to load the monster's sprite data, but will use an incorrect pathway. Under most circumstances, nothing out of the ordinary will happen, but if the player arranges the spell list of the party's lead character such that Silence is in slot 28 (common if the player selects Magic Order 3 in the config menu), the byte the game tries to load for the failed Sketch will be volatile junk data.