Skeeskee is an enemy in Final Fantasy VII. It is found in the Cosmo Area and in the fourth and fifth rounds of the Battle Square during the time Tiny Bronco is available. When fought in the Battle Square its stats are enhanced with double the regular HP, and its Attack and Magic Attack are increased by 25%.

Skeeskee uses Rage Bomber as a counter-attack when it's below 50% of its Max HP, which may inflict Fury on a party member and do heavy damage, but is otherwise an unremarkable enemy. As usual, Enemy Skills defeat Skeeskees quickly. 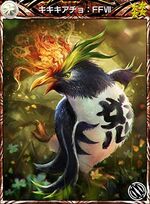 Skeeskee may serve as an homage to Neon Genesis Evangelion character Pen Pen. Both have similar naming schemes and are warm-water penguins.

The marking on the monster's chest is the Japanese kanji for "anger", 怒?. When a group of three Skeeskee are defeated, the player receives 666 experience and 666 gil.

Rage Bomber.
Add a photo to this gallery

Skeeskee's name in both English and Japanese are both likely meant to be onomatopoeic sounds the bird makes. kikiki (キキキ?) represents screeching, and acho (アチョ?) would represent the sound it makes when attacking (a representation of the Bruce Lee cry).

Retrieved from "https://finalfantasy.fandom.com/wiki/Skeeskee?oldid=3429905"
Community content is available under CC-BY-SA unless otherwise noted.