The Sister Ray (シスター・レイ, Shisutā Rei?), also known as the Mako Cannon (魔晄キャノン, Makō Kyanon?), is a huge weapon built by the Shinra Electric Power Company in Final Fantasy VII. When standing atop the cannon, the location name is displayed as "Canon".

Its power is originally run by Huge Materia from the Junon Underwater Reactor, though later it is moved to Midgar so that it can be powered by the city's vast mako reserves. The cannon's blasts of energy are powerful enough to destroy entire cities or Weapons, and can cover massive ranges while retaining their strength.

The cannon was originally installed in Junon. In Crisis Core -Final Fantasy VII-, it appears in a flashback as a virtual battle ground for Sephiroth, Angeal Hewley and Genesis Rhapsodos. The battle is intense enough that most of the cannon is sliced off into the sea. However, it is just a simulation.

In Final Fantasy VII the cannon can be seen as the party first travels through the city, but it is not used until after the emergence of Weapons following Sephiroth's summoning of Meteor. When Tifa and Barret are kidnapped by Shinra to be used as scapegoats for the crisis the planet is in, Tifa is thrown into a gas chamber to be executed. The plans are ruined when the Sapphire Weapon charges at Junon from the sea.

The first firing of the cannon is ineffective, and the Weapon's counter-attack blasts a hole in the fortress's armor. The Weapon charges a second blast, but the second firing of the cannon at point-blank range destroys it. Tifa escapes the gas chamber through the hole the Weapon blasted and runs onto the cannon's barrel. After a brief slap-fight with the Shinra executive Scarlet, Tifa escapes onto the Highwind.

Later, when the party arrives in Junon to get the Huge Materia from the Underwater Reactor, the cannon has disappeared. Cloud takes note by stopping and mentioning that something is missing.

After the near-disaster in Junon, the cannon is moved to the capital city of Midgar, where its power is boosted by the mako reactors around the city. Specially designed to destroy the force field around Sephiroth's base within the North Crater, President Rufus Shinra puts the hopes of the survival of the planet—and his company—on the cannon. Scarlet dubs the modified cannon the "Sister Ray".

A second Weapon emerges from the ocean, the Diamond Weapon, and makes a beeline for Midgar. Despite the party's attempts to defeat it, the Weapon continues its advance towards Midgar. The Sister Ray is fired with such force that the windows of the Shinra Building shatter and parts of the cannon itself dislodge and fall off. With one blast, the Sister Ray fatally wounds the weapon and obliterates Sephiroth's barrier.

Diamond Weapon's final attack destroys the top floors of the Shinra Building and Rufus is presumed dead. Midgar descends into chaos, with various Shinra factions fighting for control while Professor Hojo takes over the Sister Ray's controls, his scheme to fire the cannon again to give his son, Sephiroth, more power at the potential cost of Midgar from the system overload. The plan is foiled when Hojo is killed by Cloud's party.

The Sister Ray is destroyed along with most of the Midgar when Meteor falls on the city. Its ruins are seen in Final Fantasy VII: Advent Children. In the opening movie of Dirge of Cerberus -Final Fantasy VII-, just before the destruction, Vincent Valentine spots Hojo at the controls of the cannon, thinking it to be just an illusion.

for Tiny Bronco has the words "Sister Ray" painted on the plane.

The cannon is not actually aimed at the Northern Cave. Although in an FMV it lands a direct hit on the location, if the player aims the Highwind the same direction as the Sister Ray and travels in a straight line, not only will they miss the northern crater, but the north continent entirely.

In the original English localization Scarlet says to Rufus But Mr. President, please do not call it a Mako cannon. This new weapon will be called...... The Sister Ray!. This is erroneous on two counts: Firstly in the localization Rufus never says "Mako cannon"—in the Japanese version he says "Mako cannon's shells" (魔晄キャノンの砲弾, Makō Kyanon no hōdan?) while in the English he just says "the shells". Secondly, while running down the cannon's barrel at Junon, the name "Sister Ray" has already been imprinted on it, and the Shinra Manager will tell the player he came to Junon to help transport the Sister Ray if one were to return immediately afterward. In the PC version Scarlet instead says "This new weapon is called" (which is closer to the Japanese), which allows the idea that the rebranding and the plan to move it, as well as the rocket plan, occurred during the time Tifa was comatose.

The Sister Ray is listed as one of the possible answers for a question in the Brain Blast minigame in Final Fantasy XIII-2. 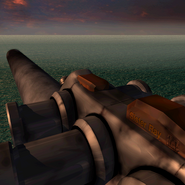 Stairs leading to the controls in Midgar.

The Sister Ray in Final Fantasy VII before being shot in Midgar.

The Sister Ray charging its shot in Final Fantasy VII.

Sister Ray as seen in a battle background.

Sister Ray during Meteorfall from Dirge of Cerberus.

The cannon may have been named after a song by The Velvet Underground, featured on their White Light/White Heat album.