Draw from Elvoret or Tri-Point

Siren is a Guardian Force in Final Fantasy VIII. She is the first non-elemental Guardian Force the player can obtain, and is the weakest offensive summon. She focuses on status effects: her Silent Voice inflicts Silence on all opponents, she learns status attack and defense junctions and a command ability that heals a party member from status ailments, and she has a refine ability that lets one create status healing items from monster spoils. Her other unique abilities are Mag Bonus that yields a permanent stat boost upon level up; Move-Find that lets the player see hidden save and draw points; and refine abilities for making curative magic and magic stones and other tools.

Siren appears as a woman with animalistic features. In place for blonde hair she has golden bird wings extend from her head. Her body is slightly covered by feathers (more so in the Remastered version). She is barefoot and has purple claws. Her eyes are purple and she holds a green harp.

Siren can be drawn from Elvoret, the boss fought atop the Dollet Radio Tower during the SeeD field exam. If the player misses Siren, they can draw her from Tri-Point in the final dungeon. If the player fails to draw her from both bosses, Siren is permanently missed. Obtaining Siren in the Steam version earns the player the achievement Siren.

Siren's attack, Silent Voice, deals non-elemental damage and inflicts Silence to all enemies. Siren's summon time is 17.6s, which, according to the Final Fantasy VIII Ultimania, allows the player to boost its damage to around 200% of normal damage using a regular PlayStation controller.

The below values are the base compatibility values with all playable characters at the start of the game. Although Seifer cannot junction Siren in a normal playthrough, a default value still exists for his compatibility.

The following table represents the base stats.

Abilities learned naturally by Siren are listed below:

Siren is a Level 8 GF Card in Triple Triad used for playing the minigame and for turning into 3 Status Atks with Quezacotl's Card Mod. It is won from the Dollet pub manager.

Siren appears with a water-elemental card.

It can be especially hazardous to miss Siren by not drawing from Elvoret, as then the player is unable to make use of the hidden save points scattered throughout the world; there are also many hidden draw points, but they can still be used when unseen. Siren is the first drawable Guardian Force, and thus most easily missed if the player doesn't yet know about this mechanic.

Siren's Tool-RF is needed to make Dark Matter from 100 Curse Spikes, which teaches Quistis her ultimate Blue Magic, Shockwave Pulsar. Siren needs to be LV100 for this to work in the original PlayStation version; she does not need to be LV100 in the PC versions or the Remastered.

Siren is more covered up by feathers in the Remastered version's summon animation, but not in her Triple Triad card. 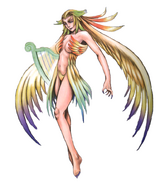 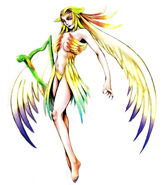 In the French localization she is called Ondine, which may be derived from the water elemental Undine.