Flute with a siren's power dwelling inside.

Siren's Flute (セイレーンのふえ or セイレーンフルート, Seirēn no Fue?, lit. Siren Flute) is a recurring weapon in the Final Fantasy series.

Siren's Flute is the second strongest flute for Eiko, providing 30 Attack and teaching the abilities Full-Life, Dispel, and Esuna. It can be bought for 7,000 gil at Black Mage Village (endgame) and stolen from Lich.

The Siren Flute is a wind instrument equippable by a level 23 Bard. It adds +2 to the effect of Foe Requiem songs. (For each additional "plus" after the first, the requiem effect gains a +10% bonus to its duration and a +1 point of damage per Tick do the damage over time effect.) It is obtained through completing the Bastok quest "Lovers in the Dusk". 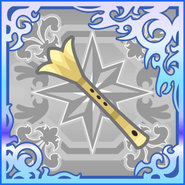 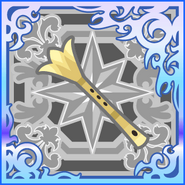