Absorbs HP with its Drain Touch. Inflicting darkness is the way to go. But after two Drain Touches it will bring out the Blender, inflicting damage on all targets.

The battle takes place immediately after the battle with Sin (fin). While the Sinscales do most of the physical attacking, Echuilles will use Drain Touch on one character to absorb HP from them. Two Sinscales will appear just before Drain Touch is used. After using Drain Touch twice, it will use Blender, which hits both party members for substantial damage.

After this fight, the party receives AP, gil, items, and equipment from Sin, Sinspawn Echuilles, and any Sincales.

The player should ensure that Tidus and Wakka are healed beforehand. Drain Touch can be negated by using Wakka's Dark Attack. Tidus's Cheer ability will raise his and Wakka's Strength and Defense enough to reduce the need to use lots of Potions.

Did you know you can inflict Blind on Sinspawn Echuilles? It's true, kupo! Bring along abilities like Dark Attack or Dark Buster to turn out its lights!

Sinspawn Echuilles appears as the boss of S.S. Liki in Final Fantasy Record Keeper. It is accompanied by three Blue Sinscales.

As per Dr. Mog's intel, it would be wise to bring along someone with a good affinity toward Celerity skills and try to hit this squidball with Dark Attack or Dark Buster. The latter has a much better chance of succeeding, but requires Lesser Orbs to synth, which are rare at these early stages of the game. More importantly, Echuilles' Blender could send the party to an early watery grave quickly, especially when followed up by its three Sinscale minions sending out Spines. Take two of them out to level the odds, then pound the boss and finish the third for the win 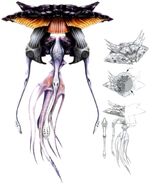 Wakka and Tidus in battle.
Add a photo to this gallery

[view · edit · purge]In a religious context, sin is the act of violating God's will. Sin can also be viewed as anything that violates the ideal relationship between an individual and God; or as any diversion from the perceived ideal order for human living. To sin has been defined as "to miss the mark".

Retrieved from "https://finalfantasy.fandom.com/wiki/Sinspawn_Echuilles?oldid=3380763"
Community content is available under CC-BY-SA unless otherwise noted.