See below
The sin eaters are beings in Final Fantasy XIV. Like the voidsent are those warped by primordial darkness, the sin eaters are living beings warped by primordial light, with a majority appearing more angelic when compared to their voidsent counterparts. While the voidsent retain their sense of self with their vices magnified, the sin eaters are usually mindless monsters who act on instinct to kill others for aether or to convert them. Sin eaters exist because the aetheric harmony of living creatures was shattered by an excess of Light aether, altering their natural forms and turning them into monstrosities without sentience that act on instinct.

On the Source during the War of the Magi, the magi of Amdapor developed stone golems in the image of sin eaters to battle the Voidsent summoned by Mhach.

The first sin eater to appear on the First was Eden, the corrupted form of Mitron. He was an Ascian whose being was aspected towards Light when Ardbert used a blade of pure Light to kill him. Ardbert's sincere wish for the light to prevail against darkness acted akin to the tempering of a primal. Mitron, now mutated into the gargantuan and mindless Eden, used its power to stifle all Darkness, causing the Flood of Light. Minfilia Warde sacrificed herself to cease it from consuming Norvrandt by placing Eden in a deep sleep within a region of the global wasteland known as the Empty.

The sin eaters created from those consumed in the Flood invaded Norvrandt while the stronger ones sired new sin eaters from their victims by planting seeds of Light and corrupting the aether of their bodies. This is a gruesome process, for the victim's very being melts away from the light within them before they are enveloped by a feathery cocoon. A new sin eater then emerges, with some victims, such as Tesleen, bearing only a few moments of self-awareness before succumbing to their new nature.

The most powerful sin eaters—dubbed Lightwardens by the locals—are few in number and radiate aether to saturate every corner of their territory with Light. Lesser sin eaters are drawn to serve them and dissipate once the Lightwarden is killed. However, the Lightwarden's essence merely transfers to the nearest living creature. Thus, the Lightwardens always return from temporary death by making their host the next Lightwarden.

The sin eaters have taken hold in Norvrandt's regions as the Lightwardens placed the land in perpetual light, preventing night from appearing for over a century. The sin eaters engaged in combat with the locals for years, slowly assimilating the populace and purging continents of sentient life.

The city of Eulmore and the reincarnations of Minfilia, who is revered as the Oracle of Light, battled the sin eaters until Emet-Selch manipulated Vauthry to be made into a Lightwarden. When the Scions of the Seventh Dawn were brought to the First, Thancred Waters became a sin eater hunter and took the current incarnation of Minfilia as an apprentice.

The Warrior of Light arrives to the First and resolves to combat the sin eaters and slay the Lightwardens. With their Blessing of Light from Hydaelyn, the Warrior can contain the aether of the slain Lightwardens, allowing night to return and forcing the lesser sin eaters to retreat en masse. Now assuming the moniker of "Warrior of Darkness", the Scions traverse Norvrandt and slay every Lightwarden, rekindling hope to the masses and bringing back the dark.

Vauthry takes offense to this campaign as his power is tied to his control over the sin eaters, but his forces cannot stop the Warriors of Darkness. With the final Lightwarden revealed to be Vauthry himself, the Warriors of Darkness free the citizens of Eulmore and force Vauthry to flee to Mt. Gulg. Uniting the people's of Norvrandt, the Scions ascend Mt. Gulg and slay the final Lightwarden, Vauthry's true form of Innocence.

After absorbing Vauthry's Light aether, the Warrior of Darkness discovers they cannot contain the full amount of Light, threatening to turn into a powerful sin eater themselves. The Scions forestall the change, allowing them to later confront Emet-Selch himself. Just when the Warrior of Darkness is about to be fully corrupted by the Light, their soul merges with their counterpart from the First, Ardbert, stabilizing them and restoring their aether.

After Emet-Selch and the Lightwardens of Norvrandt are vanquished, Thancred and Ryne traverse the Empty in search of more Lightwardens to restore the First. Ryne finds the vessel where Eden was placed, and using its aether, slowly restores balance to the land's aether.

Ever since, the sin eaters have been in decline in Norvrandt, but stragglers remain that local forces continue to combat.

Innocence (Vauthry) is the only sin eater to possess actual intelligence and sentience, apparently the result of his hybrid nature and pre-birth exposure to the previous Lightwarden's essence.

When creating the sin eaters, Naoki Yoshida and Banri Oda did not want to draw upon angelic or heavenly motifs. The name came from the idea of man's sin becoming too great and causing the world's destruction. Sin eaters exist to consume and eat, and in a sense take those sins away.[1]

Tesleen turned into a Forgiven Cowardice

A swarm of Forgiven Venery 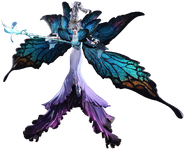 The lesser sin eaters are usually named after sins, vices, and other negative character traits for which they've supposedly been forgiven. With the exception of Innocence and Titania, the Lightwardens take their names from The Four Loves.

The attacks used by the Lightwardens and other great sin-eaters often draw their names from historical torture devices and methods, such as "The Tickler" and "Brazen Bull".
Spoilers end here.