Simurgh is a rare enemy from Final Fantasy X. Notoriously difficult to capture for the Monster Arena, Simurghs can be found on the northern end of Djose Highroad. Players may have a higher chance of locating it at the intersection of Djose Temple and Moonflow.
See also: Simurgh (enemy)

It is hard to hit and weak to fire. The Simurgh's attacks have a 30% chance of inflicting Darkness unless Provoked, and it has a 33% chance of focusing its attacks on Wakka.

Simurgh will drop weapons with Sensor and armor with Dark Ward. In the original JP/NA version, it drops weapons with Strength +3% and Magic +3% instead of Distill Speed.

Because it is flying and hard to hit, Wakka's attacks are most effective. It is also weak to Fire, so Lulu's Fire magic is useful. 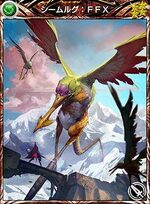 [view · edit · purge]Simurgh (lit. "thirty birds") is the modern Persian name for a gigantic benevolent mythical flying creature. In the Sassanid Empire era, it is depicted as a peacock with a head of a dog (sometimes with a face of a human) and the claws of a lion. The figure can be found in all periods of Greater Persian art and literature and was used as the royal symbol of the Sassanid Empire. In modern depictions, however, such as that of the Iranian 500 rials coin or the flag of Tat people, it is entirely birdlike.

Français
Community content is available under CC-BY-SA unless otherwise noted.