Head of the Orbonne Monastery

The Father watch over you, child.

Simon Penn-Lachish, also known as Simon Pen Rakshu, is a non-player character in Final Fantasy Tactics. Head of the Orbonne Monastery, Simon is a devout follower of the Church of Glabados. He cared for both Alma Beoulve and Princess Ovelia.

He uses the unique job class Elder (Bishop in the PlayStation version).

Simon was part of the Pagan Examiner for the church. A high-ranking official, Simon quit from his rank and moved away from the church after an unknown incident. Preferring a hermit's life, he moved into Orbonne Monastery and spent most of his time reading the books kept at its large library.

Simon discovered the Scriptures of Germonique. Intrigued by its contents, which prescribe the unknown life of the prominent religious figure known as Saint Ajora Glabados, Simon became obsessed with dissecting and understanding the scripture, coming into realization that the text was kept hidden within the monastery's library because it tells the whole truth of Ajora.

Princess Ovelia was sent to Orbonne to learn from Simon and he received the Virgo auracite as proof of her birthright. Simon gave his heart out into teaching Ovelia about the religion.

During the War of the Lions, Knights Templar of the church storm the monastery and trespass into the deep library. In the fighting that follows, Simon is murdered by the Knights. In his dying moment he passes the Scriptures of Germonique to Ramza.

An elder of the Church who never rests in his mission to spread the teachings of the gods to the common people.

Elder is a story-related job used in cutscenes, and serves no purpose in battle as there are no abilities associated with the job. It still has a job description.

Simon has a water-elemenal card.

Simon appears as a card in the Ivalice Special Arena has a limited-time special arena with eighteen floors. 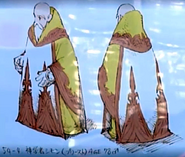 [view · edit · purge]Simon is a common name, from Hebrew שִׁמְעוֹן Šimʻôn, meaning "He (God) has heard".