The Silver Dragon[note 1] is a boss from Final Fantasy IX. It is a creature indigenous to Terra, as it is frequently seen as Kuja's method of transportation, and later a creature summoned by Garland to attack the party in Pandemonium.

The silver dragons have feathery wings, and their descriptor comes from their coloration, which is mainly pale green with some pink details. During the Second Battle of the Iifa Tree, a horde of silver dragons emerges from the fuchsia cloud above the Iifa Tree. Their leader appears to be the Nova Dragon.

Can't escape. Characters do not pose on victory.

Claw, Twister, Shockwave, Aerial Slash
I no can eat!

After the battle, the player will face off against Garland.

It is recommended to have high Defense and equipment that can nullify or absorb Wind-elemental attacks, such as Ribbon or a Coronet. Quina's Night spell works, but the player party needs to be protected against Sleep. 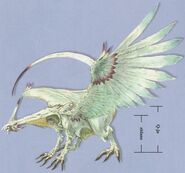 [view · edit · purge]Metallic dragon is a classification of dragon in Dungeons & Dragons where they are of good alignment, and their deity is Bahamut. Silver dragons are the second-most powerful of the metallic dragons, who enjoy the company of humans and elves so much they often take their form and live among them. The early Final Fantasy series derived a lot of influence of Dungeons & Dragons. However, in Final Fantasy IX, the silver dragons are not actually metallic, and their descriptor comes from their color.

Silver Dragon's Japanese name, "Ginryu", may be a pun on "Shinryu", the superboss from Final Fantasy V who also appears in IX as the apparent leader of the silver dragons, translated to English as "Nova Dragon".