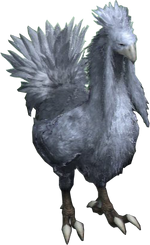 Silver Chocobo (銀チョコボ, Gin Chokobo?) is a recruitable monster from Final Fantasy XIII-2. It is obtained by throwing Mog (with the "Improved Moogle Throw" Fragment Skill turned on) at the Bhunivelze's hologram image in the Academy headquarters in Academia -4XX AF- and can also be dropped by Valfodr Lv.15 in the Perpetual Battlefield DLC.

The crystal has a 3% chance to drop from Valfodr, and is considered a common item drop. Therefore, a Collector Catalog and/or a higher battle rating will improve drop chances, but the Monster Collector Fragment Skill won't.