Silent Verse (沈黙の歌, Chinmoku no Uta?), also known as Song of Silence and Silence Song, is a recurring ability in the Final Fantasy series. It is used by Bards via the Sing command, and inflicts Silence on enemies.

Silent Verse is used via the Bardsong command, and inflicts Silence on target enemies. Edward can use Silent Verse innately in all versions of the game, and in the DS and mobile versions, anyone with the Bardsong Augment can also use it.

Edward can inflict Silence on opponents by his Silent Verse song, performed randomly from his Bardsong command when targeting enemies.

Silence Song is an enemy ability used by Gargoyle, it inflicts Silence on one target.

One of Edward's cards, depicting his Amano artwork, can use the Song of Silence ability. The player chooses one Eidolon and voids its effect, for the cost of one Ice CP and discarding another Edward card. 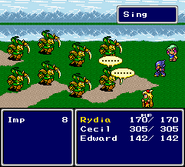 This gallery is incomplete and requires Final Fantasy Mystic Quest added. You can help the Final Fantasy Wiki by uploading images.
Sing
Community content is available under CC-BY-SA unless otherwise noted.
Advertisement