Inflicts silence on the target.

Silence, also known as Mute,[1][2] is an Effect spell in Final Fantasy VI. It inflicts the silence effect to a target, preventing them from casting spells. The spell is taught by magicite.

Silence is also an enemy ability used by Curlax, Level 40 Magic, Magic, Magic Master, Wizard, Abaddon, and Misty. There is also an enemy spell called Silence which has the same graphical effect as the gray spell the party can use. It has an Hit Rate of 90, and it cost 20 MP for the enemy to use. This version of Silence is not reflectable and is unaffected by Runic. It can be cast by Naude.

Silence is learned from Siren at a rate of x8.

Silence is affected by reflect and Runic.

Silence is an inexpensive and somewhat effective debuff. Against enemies that rely on spellcasting to deal damage, Silence can remove their main source of damage for a small MP cost, provided the spell lands. However, some larger enemies and bosses are immune.

As alternatives to Silence, the spells Imp and Berserk also prevent enemies from spellcasting, but both have higher MP costs (although Berserk has a higher hit rate). Other negative Effect spells, such as Stop and Confuse, can cripple enemies to a greater extent, but have higher MP costs or lower hit rates. The party could also summon Carbuncle against enemies that use reflectable spells.

Because Silence is not affected by the caster's Magic stat, the spell can be taught to every party member. However, it is not a high priority to teach the spell to any party member, as it will not be used too often. 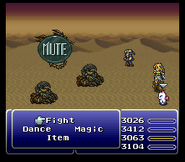