Cosmo Canyon, Cave of the Gi

Unknown number of dead and wounded, including Seto
Complete annihilation, including the death of Gi Nattak

The Siege of Cosmo Canyon is an event in Final Fantasy VII that occurs in εγλ 1959, in which the war-hungry Gi tribe attempts to invade Cosmo Canyon.

Though nearly extinct during the events in Final Fantasy VII, by the the time, most of the inhabitants of Cosmo Canyon were the lion-like species Red XIII belongs to. They serve as the guardians of the peaceful Cosmo Canyon.

The malicious Gi tribe lay siege on Cosmo Canyon, and attempts to break through by attacking through what was later called the Cave of the Gi. Seto, one of the guardians of Cosmo Canyon, rushes to the cave to stop the flanking manouver. He singlehandedly fights his way through the cave, defeating the invasion without any help. Even after he is hit by poison arrows that slowly petrify him, he keeps fighting until he turns to stone. While he perishes, his sacrifice prevented the Gi from invading Cosmo Canyon, and the Gi invaders were presumably wiped out.

Seto and his mate had agreed to keep the existence of the cave a secret, and thus his son Nanaki never learns from his mother what happened to his father. The cave is sealed, fulfilling Seto's last wish that everyone forgets about it.

Nanaki's mother died shortly afterwards, and he is raised by Bugenhagen. Oblivious of what had happened, he believed his father was a coward who ran away from the front line.

When Nanaki later returns to Cosmo Canyon as part of Cloud's party, Bugenhagen decides to show him the truth about his father. He leads them through the Gi Cave, which is haunted by the ghosts of the warriors who were killed in the battle. At the cave's rear entrance, Nanaki sees the petrified body of his father. Shame now replaced with pride, Nanaki vows to become a great warrior like him and fight with AVALANCHE in their struggle against Sephiroth. Nanaki's conversation with Bugenhagen is interrupted by tears shed by Seto's petrified remains. 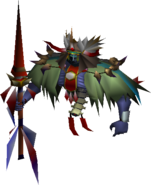 Gi Nattak, the leader of the Gi tribe 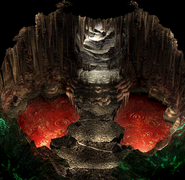 Rear entrance of the Gi Cave

Nanaki paying respect to his father