A small tribe living in the northern region. Basically gentle in temperament, they maintain a relaxed lifestyle. Shumis have big, long arms that change as they grow. The results vary depending on their environment.

The Shumi, or Shumi Tribe (シュミ族, Shumi-zoku?), are a race of humanoid creatures in Final Fantasy VIII who live in isolation on Winter Island in Trabia. Seemingly simple and artistic in nature, they possess a unique technology that makes use of both man-made and bio-natural products. 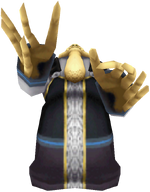 While nearly humanoid, it is unclear whether the Shumi have genders like humans. Their most prominent physical feature is their oversized hands, used for digging and craftsmanship. The Shumis' appearance depends on their inner nature, and at an undisclosed period in their lives, a Shumi will evolve into a form most reflecting their personality. This fact greatly affects their cultural attitude towards themselves and other beings.

The Moomba is perhaps the most common form that a Shumi may take due to their holding Moombas in high enough regard that most wish to become one when their time comes. The form of an Elder Shumi is reserved for those who demonstrate certain traits toward the Shumi community. This form, while greatly similar to the common Shumi, appears much taller, and seems to possess a facial feature similar to human beards. The Sculptor at the Shumi Village workshop explains that often those who fail to evolve into Elders, turn into Moombas, and that their fur is red due to the "passionate ingenuity of their hearts."

The form of NORG, a black sheep of the Shumi tribe, though possessing considerable mercantile skills, may either be a perverted version of the Elder due to his greed, or an entirely different form altogether. One Shumi has also expressed a desire to evolve into a human, however, it is unclear whether they actually can. Exactly how many forms a Shumi can evolve into, or whether there is a limit to their options of physical form, is also unknown.

Upon NORG's defeat he becomes an egg-like cocoon that will eventually hatch.

As their evolution depends greatly on their inherent attitude, the Shumi are, on average, tolerant and humble pacifists of good nature. The Shumi commonly hide their hands, as they believe that their hands, essential in crafting, are their greatest tool. For a Shumi to flaunt their hands is seen as poor taste, while if a Shumi who normally does not show their hands, offers them to someone, it is seen as a mark of respect; the higher in rank and humility that the Shumi is, the higher the respect paid becomes. Another notable trait is their tendency to refer to each other by their job description instead of a given name. This may be another mark of humility.

In contrast, NORG displays behavior and actions that grossly contradict the Shumi culture; and as a result, has grown rotund to reflect his greedy and cowardly personality. It is unknown whether he has been cast out of the village, although he has been labeled as the tribe's "black sheep".

The Shumi are also known to appoint "Honorary Shumi"s, even outside of their own tribe; Master Fisherman is one such person, who gained his title by designing the hologram in the village elevator.

The Shumi live in the Shumi Village; a deceptively prosperous village located underground on the snow-covered Winter Island in Trabia. The sole above-ground structure - the outer-dome - is reminiscent steam-punk design with cold bronzed metal and glass. The underground village itself displays lush flora, fauna and ponds along walking paths dotted by small chromed huts that also follow the reminiscence of steam-punk design.

While the designs suggest a skill in metal smithy, key locations, such as the village elevator and the inside decor of said huts, suggest that the Shumi are well on par with the rest of the Final Fantasy VIII world in regards to modern technology. In addition to this, the unique addition of bio-natural items in their village architecture; most predominantly seen in the bio-luminescent rocks that light the cavern (323 meters below sea level).

The tribe's "black sheep", NORG, plays the largest role of all the Shumi. NORG was the one who financed Cid Kramer in his plan to build the Balamb Garden and up until his defeat, NORG worked as the Garden Master and was responsible for running its finances; in fact, hiring out the SeeD as mercenaries was NORG's idea. Starting out as partners, Cid and NORG began to drift apart when NORG cared less about the SeeD's true mission and more about filling his own pockets with gil. The division finally culminated in an all-out war between the two.

When Laguna traveled to Trabia, his plan to cross the Vienne Mountains to Esthar, he got himself injured and Moombas rescued him and brought him to the village to recover. The incidence was unusual, as usually humans aren't seen within the village. Laguna made friends with the villagers and during his stay tried to teach the Moombas to speak. He made such an impression the Shumi eventually build a statue in his memory.

When Squall visits the village he learns that the Elder's attendant, whom the Elder is hoping would become the next Elder, is unwilling to follow the path set out for him; instead, he wants to leave the village and travel around the world, just like his idol Laguna had and is convinced of wanting to evolve into a human. The Elder seeks the player party's help in showing his attendant that the Shumi way of life is their destiny, in a series of sidequests which reward the party with some valuable items.

Shumi Tribe is a Triple Triad card used for playing the minigame and for turning into Gambler Spirit with Quezacotl's Card Mod. It is a rare outcome for successfully carding a T-Rexaur or a Grat. Though the card depicts NORG and is a Level 6 Boss Card, the card is called "Shumi Tribe". 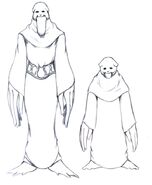 Concept art of the Shumi tribe by Tetsuya Nomura.