Covered by a hard shell. Slow-moving, but has high physical and magic defense. Vulnerable to fire, but takes only half damage from other elements. Its Bash may inflict slow.

Shred is a fiend in Final Fantasy X found in the Calm Lands. It shares its model with the Halma. It has a hard shell only punctured with Piercing weapons.

Shred's thick shell can be penetrated by Auron or Kimahri's piercing weapons. Like most of its armored cousins, the Shred's standard attack will sometimes cause Slow, unless Provoked, where it will use an attack with reduced accuracy.

Shred will drop weapons with elemental strike abilities, and armor with Berserk Ward. In the original JP/NA version, it drops weapons with Strength +3% and Magic +3% instead of Distill Power. 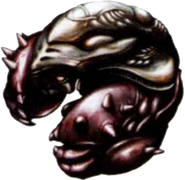