Shotgun (ショットガン, Shottogan?) is a recurring ability in the series. It generally inflicts non-elemental physical damage, but is usually not very powerful. It is most commonly used by Rufus Shinra.

Shotgun is an enemy ability used by Rufus which inflicts non-elemental physical damage to one target.

Shotgun is an enemy ability used by the Elite Security Officer, who fires off 6 shots 3 times, sometimes only once, at a target.

Shotgun is an aerial physical Bravery attack for Laguna, learned by default. It requires 30 CP to equip (15 when mastered), 90 AP to master, has Ranged Low priority on the normal version and Ranged Mid priority on the charged version, and can induce Wall Rush. Laguna fires a quick blast of gunfire that has a short range, and by holding

, Laguna can fire a more focused gunshot that can hit mid-range more reliably.

Shotgun is a Bravery attack for Laguna. It is a group ranged attack. It inflicts ATK Down I on a target for 3 turns. 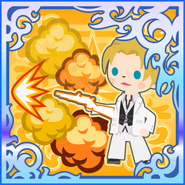 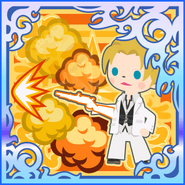 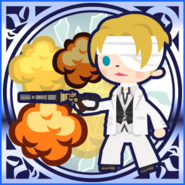 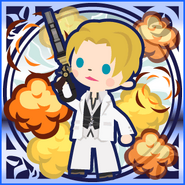 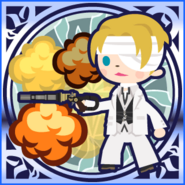 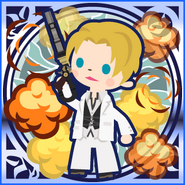 [view · edit · purge]A shotgun is a firearm that is usually designed to be fired from the shoulder, which uses the energy of a fixed shell to fire a number of small spherical pellets called shot, or a solid projectile called a slug.

Its appearance and alternative name SPAS is based on the real-life Franchi SPAS-12[1], which is a 12-gauge Italian shotgun known to be usable both in semi-automatic and pump-action modes.