To execute the attack, the player chooses a type of ammo to fire multiple times with the trigger button (

on PlayStation) at one or all enemies, depending on the ammo type chosen, within a set amount of time. The amount of time depends on the Crisis Level.

The Shot's allotted time depends on the Crisis Level in the following way:[1]

Irvine can freely switch between targets when firing single-target shots, and can end the Limit Break prematurely with the Cancel button (

on PlayStation). When an enemy's HP is reduced to 0 during the Limit Break, additional shots will deal 0 damage.

Capping Irvine's Strength at 255 in tandem with the Vit 0 status effect gets the most out of Shot. True damage output comes with the fast fingers of a skilled player executing the Quick Shot. During the longest of Irvine's Shot rounds, it is possible to expend in excess of 50 Fast Ammo rounds, averaging around 1700–2200 points of damage each, under ideal conditions (Irvine Strength 255, Enemy Defense 0), with critical hits roughly twice that value.

Roughly 120,000 points of damage in one of Irvine's attack rounds is possible here, though in longer fights, such as versus Omega Weapon; this will expend all of Irvine's Fast Ammo shells in a handful of attack rounds, limiting his damage-over-time capabilities. Switching to Normal Shot will let him continue doing considerable damage, as demonstrated in this video.

With Pulse Ammo, each shot will likely reach the 9,999 damage cap, but during even the longest rounds of Shot, only eight volleys are possible, returning a lower damage output than when using the Quick Shot.

Shot is especially useful in Centra Ruins for quickly dispatching Tonberries with Armor Shot. The player can keep Irvine at low health to kill the Tonberries in one move, and refine the Chef's Knives the Tonberries yield into more AP Ammo. Armor Shot is also good for killing Adamantoises, which have high defense.

Irvine uses his Shot skills in his spin-off appearances. In Dissidia Final Fantasy Opera Omnia, in Dissidia Final Fantasy Opera Omnia, Irvine's various Shot Limit Breaks make up his entire moveset. His base skill is Canister Shot, while his Level 20 skill is Scatter Shot (prior to an update, it was referred to as "Grapeshot"). His EX ability is Armor Shot. His LD ability is called Alternative Shot, and changes his basic Brave Attack into three charges of Dark Shot, and his HP Attack into a single charge of Hyper Shot. 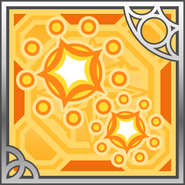