The Shoopufs (Original: シパーフ, Shipāfu?, FFX International: シューパフ, Shūpafu?) are a species of large elephantine animals in Final Fantasy X and Final Fantasy X-2. They are used as pack animals by the Hypello to transport customers across the Moonflow.

According to Maechen, shoopufs never visibly eat. Some believe they feed on tiny organisms in the water (likely the Spira equivalent of plankton or algae). Shoopufs appear on the Moonflow and are used as steeds and pack animals by the locals. A shoopuf can sometimes wander through the Bikanel Desert in Final Fantasy X-2 during a dig, and two may appear at the Oasis alongside a Hypello. Shoopufs can also be observed on the CommSphere at the Mt. Gagazet hot spring.[1]

Ten years before game's start, Braska, Auron, and Jecht went to Moonflow to use a shoopuf to get on the other side of the river. Jecht was drunk when they arrived and because it was his first time seeing a shoopuf, he mistook it for a fiend and attacked it. Jecht, out of embarrassment for Braska, used all of his travel money to pay for the damage and fearing over his family being ashamed of him, swore never to drink anything stronger than shoopuf milk again; he stopped drinking alcohol from that day as well. Auron points out that the same shoopuf is still alive and able to convey people, and its right hind leg bears a long scar, visible while the party is at the Shoopuf station.

While heading to Besaid after the beginning of Braska's Calm, Yuna and Kimahri rode a shoopuf; Yuna fell off into the water, and was saved by the shoopuf. Following this, Yuna jumped off of the shoopuf three more times just for fun, though not without incurring the concern of Kimahri.

During the game's events, Yuna and her guardians cross the Moonflow from the South Bank onto the North Bank atop the shoopuf. Wakka and Lulu explain to Tidus the reasons for war machina prohibitions. During the travel, Al Bhed attempt to kidnap Yuna, but Wakka and Tidus charge in and destroy the Extractor which traps her. After the accident, they safely arrive at the North Bank.

During Chapter 4, Yuna, Rikku, and Paine travel across the Moonflow; they need to use the shoopuf to get from the South Bank onto the North Bank to continue their search for Tobli whom they want to ask to help organize a concert.

The player has also has the option of viewing a concert which is held atop a shoopuf at the Moonflow when certain conditions are met. If all of the missions at the Moonflow are completed, when Yuna goes to see Tobli, she, Rikku, and Paine are invited to join in the concert and stand upon the shoopuf.

On occasion, a shoopuf can be found in the Oasis in the Bikanel desert or in the Hot Springs at Mt. Gagazet.

When Chuami and Kurgum are sent to Besaid by Baralai to meet with Yuna, Kurgum shows her a movie sphere with a recording of two shoopufs at the Moonflow. The shoopuf was the last of its kind after the female was killed by Sin thirty years ago, but it mysteriously reappeared one morning, causing Yuna to believe the shoopuf had been "beckoned".

Kurgum tells Yuna she must accompany him and Chuami back to Bevelle and address the Spiran Council and as they pass over the Moonflow on an airship, they see the shoopufs and a crowd of onlookers, where half of the people are illusions created by the pyreflies. 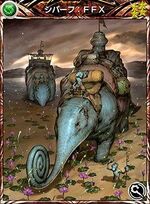 During chapter 3, Wol must retrieve "special medicine" from a Shoopuf Farm to proceed. Shoopuf do not make a physical appearance.

A pair of shoopuf in the hotspring of Mt. Gagazet, Final Fantasy X-2.

A shoopuf being used as a stage for Tobli's show in Final Fantasy X-2.