Shock Spikes is a recurring spell in the Final Fantasy series.

Shock Spikes is a Black Magic spell. The spikes do an amount of damage contingent upon the caster's Enhancing Magic skill and the target's resistance to Lightning damage.

Generally this spell will not do more than 15 damage per hit at level 75, and starts out much weaker than that. In addition to dealing lightning damage, Shock Spikes have a chance of stunning anyone who physically hits a target with the spell active.

The Shock Spikes scroll can be bought from merchants in Selbina, Nashmau, and Windurst Waters.

Shock Spikes appears as an enemy ability usable by the Electric Aether enemies during the add phases of both Eden's Verse: Refulgence raid encounters. When used, the Electric Aether will gain an effect that automatically deals moderate damage to any players who attack it.

Originally, Shock Spikes was a rank 8 Conjurer spell during the initial launch of the original version of Final Fantasy XIV. It cost 3 action points to set, 12 MP to use and had no TP cost. Its cast time was 3 seconds while its recast time was 10 seconds. Once unlocked, it could be used by all Disciples of War and Magic.

In addition, it had an upgrade in the form of Shock Spikes II. However, Shock Spikes and its upgrade were dropped in patch 1.20.

Shock Spikes is a passive ability that allows one to sometimes counter with thunder when hit. It can be used by Metalliskull, Rairamuh, Ramuh, Ramuh★, and Spark Dragon. 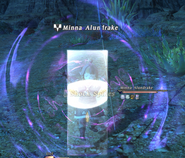 Final Fantasy XIV (Legacy).
Add a photo to this gallery

[view · edit · purge]Shock refers to a dangerous condition that disrupts the blood flow of the body. Electric shock is the physiological reaction or injury caused by electric current passing through the (human) body.