Shivalry is a Mirage in World of Final Fantasy.

For the character, see Shivalry★ 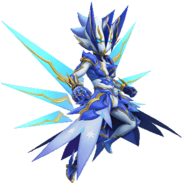 In Japanese pronunciation "Shiba" could also refer to the Queen of Sheba whom King Solomon of Israel fell in love with, lending to the "Queen of Ice" title.

Retrieved from "https://finalfantasy.fandom.com/wiki/Shivalry_(Mirage)?oldid=3422582"
Community content is available under CC-BY-SA unless otherwise noted.