Cid Pollendina: Oh, shut up and help me remodel the Shivalry page!
Please expand this article into a full one. The following tasks need to be completed:This request can be discussed on the associated discussion page. Remove this notice upon completion.

Shivalry is a minor character in World of Final Fantasy.

Notes: Self-proclaimed "cool face of justice" / Hopelessly cheesy / Only hears what he wants to

Shiva's Biggest Headache
Shivalry believes, without an iota of doubt, that he is the very epitome of righteousness, and that it is his burden—nay, his duty!—to instill the proper values in all who stray off the ethical path.

There are few things more irritating than having Shivalry get on your case. He's as stubborn as an unfed chocobo and simply refuses to be reasoned with. At least, that's what Shiva will tell you.

Not Technically a Villain
Why did Shivalry declare with such certainty that Shiva-Ixion was evil? Chalk it up to experience. While traveling from world to world and righting wrongs (whether wrong or right), Shivalry has come up against the Exnine Knights and the Cogna enough times to know they're bad news.

So when he saw that Shiva-Ixion had a little machine in her, he decided it was his sacred duty as Chief of the Shiva Justice Police to stop her before she could shame their tribe. Of course, this was all a big misunderstanding.

So is he a villain? No. Is he a good guy? Also probably no. Let's not forget that to get into Grymoire in the first place, he had to bust his way through an innocent human. Whatever you want to call that kind of stunt, justice it just isn't. 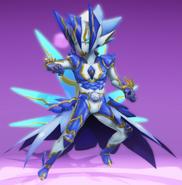 Shivalry as he appears in the Mirage Manual.