The barren hills and icy peaks of Coerthas play host to countless battles in the never-ending war between the nation of Ishgard and the Dravanian horde. As their age-old struggle wages on, a new threat has emerged: the primal Shiva, Lady of Frost. Who has summoned her, and how will the Warriors of Light stand against this mighty maiden of ice?

According to legend, an Elezen maiden named Shiva fell in love with the dragon Hraesvelgr. As her life is but a blink of an eye compared to the ageless dragons, Shiva besought Hraesvelgr to devour her so her soul would be entwined with his for eternity. Though reluctant at first, Hraesvelgr honored Shiva's request and inspired an alliance between man and dragon that lasted for two hundred years. The calming influence of Shiva's soul kept Hraesvelgr from participating in the Dragonsong War.

We whom gods and men have forsaken shall be the instruments of our own deliverance! Partake of my flesh—fill this vessel with your light! Walk amongst your brothers and sisters once more! O Saint Shiva, still the hatred within our hearts and bless us with eternal grace!

In time, demonized by the Holy See of committing the grave sin of laying with dragons, Shiva became a patron saint to the heresy cult that sided with the Dravanian Horde. Ysayle Dangoulain, known as Lady Iceheart of the Harriers, attempts to summon Shiva's essence into her own body and becomes an avatar for her perceived vision of her faith's saint to battle the Warrior of Light, but is defeated and restored to her original form.

When the Ishgardians attempt to build an outpost to guard the area, the Harriers drive them off and, using their store of crystals, enable Ysayle to transform into an even more powerful incarnation of Shiva. Despite her newfound power, the Warrior of Light defeats her again. She later allies with the Warrior to defeat Ravana and transforms into her Shiva form, but Ravana easily defeats her.

Ysayle would later learn, to her shock and dismay, that the "Shiva" she summoned was but a collective manifestation of her and her fellow Heretics' beliefs and prayers. She uses this form one final time when the Garlean dreadnought Gration is chasing the Enterprise Excelsius in the skies of Azys Lla to distract the Garleans long enough for the Excelsius to escape. She is killed, but thanks the Warrior of Light for showing her the light. As a result of her assault, the Gration is forced to remain moored at Azys Lla indefinitely due the engines being sealed in aetheric ice.

During the Warrior's adventures in the First, they help Ryne bring life back to the Empty by fighting versions of the primals from the Warrior's memories to restore the land's elemental aether. With only the ice element left to add, Ryne offers herself as the vessel for the First's version of Shiva upon hearing Ysayle's story. She loses control of her primal form and is saved by the intervention of Gaia.

Ysayle's Shiva form is fought twice as a boss in

The Akh Afah Amphitheatre: once during the "Dreams of Ice" main scenario arc, and in an optional Extreme battle. Both are fought at level 50 with a full party of eight. Completing

The Akh Afah Amphitheatre (Extreme) grants the achievement "Let It Go" and "Mightier than the Frost" with a party of 8 blue mages with echo turned off and level synced to 50.

Ice Barding will grant a player's chocobo companion armor similar to that worn by Shiva.

In 5.3, Shiva was fought in an Unreal trial for a limited time in

The Akh Afah Amphitheatre (Unreal). The whole instance, aside from item level, item level sync, and the boss's level upscaled to level 80, is identical to its extreme difficulty. Completing it gives you a Faux's Hollows once a week. As of 5.4, Shiva Unreal is no longer available and was replaced by

Ryne's Shiva form is fought as the boss in

Eden's Verse: Refulgence, having the ability to redress herself into a form resembling Hydaelyn or summon a replica of Hraesvelgr to equip.

The two themes that play while battling Shiva are "Footsteps in the Snow" and "Oblivion" on the original soundtrack.

The First's version of Shiva uses "Footsteps in the Snow" and its remix, along with "Return to Oblivion" as her boss themes.

Shiva appears as an Ice-elemental card.

Square Enix's Eorzea Cafe served a dish called "Cremet d Anjou of Shiva ~no-bake cheesecake~" whose description translates to: A dish inspired by Ice Goddess, Shiva's Icicle Impact attack. For some reason, 'that' snowman is nestled in the lone corner of the battlefield (plate) where shelter may be taken...?

The posture that Ysayle and Ryne take prior to summoning Shiva into themselves is identical to the beginning of her incarnation in X's version of Diamond Dust.

The First's version of Shiva, created from Ryne, is voiced by Emma Ballantine in English and Kana Ichinose in Japanese. 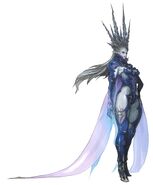 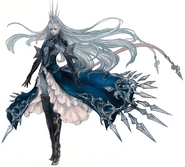 Shiva and Lady Iceheart in a promotion for "Dreams of Ice".

Shiva and Lady Iceheart in a promotion for Heavensward.

Early, in progress, render of Shiva.