Shiva, also known as the Twin Sisters of Shiva, is Snow's Eidolon in Final Fantasy XIII. The Twin Sisters, Stiria (スティリア, Sutiria?) and Nix (ニクス, Nikusu?), are ice-elemental mechanical women who can transform and merge into a motorcycle. 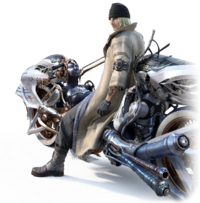 The elder sister Stiria has dark blue skin with a pale blue claw mark on her right eye. She has dark blue and white color palette with bronze highlights. Stiria's torso serves as the front half of the motorcycle, with the wheel on her head as the front wheel, the protrusion near where her ears should be as the handlebars, and her legs as the exhaust pipes.

Nix has pale blue skin with a blue skintight clothing and silver metal armor. Her headdress, which becomes the back wheel well, has Etro script for "Shiva". Beneath her visor is a dark blue claw mark on her left eye. She wields a floating wheel. Nix's forearm and head serves as the backrest of the motorcycle.

The Latin writing on the sphere of ice during the summoning animation reads:

By the grace of Etro, twin rulers arise from your icy thrones. Come forth, sisters of Winter wastes.
A name in blood, a pact of ice. Shiva shall rise, her bond eternal and unyielding.
Aurora Borealis
Aurora Australis

Eidolons are entities who reside in Valhalla, the middle world between the mortal realm and the unseen realm of the dead. They answer to Goddess Etro, the deity that rules over Valhalla, who sends them out to help l'Cie who struggle with their Focus.

Snow faces Stiria and Nix in Lake Bresha after remaining behind while Lightning and the others moved on. He is apprehended by PSICOM, and when surrounded, inadvertently summons Shiva. After the Shiva Sisters annihilate the PSICOM forces, the sisters turn against Snow, who must defeat them to tame them. His eidolith manifests as a heart-shaped crystal, which he can from then on take from his l'Cie brand and shatter to call forth Shiva's aid in battle.

Snow summons the Twin Sisters when the party returns to Cocoon from their excursion on Gran Pulse. They crash a grand prix event in Eden and ride through the racetrack with their Eidolons in Gestalt Mode. After Cocoon falls and is crystallized, Snow awakes with his l'Cie brand gone and is presumably no longer able to summon the Shiva Sisters.

The Shiva Sisters help Lightning fight Caius in Valhalla, but are of different color then Snow's Shiva, suggesting they are an alternate form, like Caius's Chaos Bahamut.

Snow becomes a l'Cie again, and in the paradox ending, "The Future is Hope," he drives the Shiva motorcycle onto a quest after exposing Alyssa Zaidelle's treachery.

The Shiva Sisters appear during Lightning's final battle when Snow summons them to shield her. Afterward, the Shiva Sisters bid farewell to the party and disappear alongside the other Eidolons. There is also a general store in Yusnaan called Nix and Styria General Store, named after the Shiva Sisters.

The battle with Shiva is the first Eidolon fight in Final Fantasy XIII. The tutorial for Eidolon battles appears before the battle starts.

Since Snow fights his Eidolons alone, Stiria cannot be targeted, but instead heals Snow as he has no other support. Shiva Sisters "yield to those who defend against attacks," so the simplest method of victory is to Paradigm Shift to Sentinel and repeatedly use Steelguard.

While summoned, the sisters have separate ATB Gauges, but both will be dismissed if their shared SP Gauge falls to zero. This is compensated by Stiria not being able to be directly targeted. In normal mode, Stiria focuses on the Medic and Ravager roles, healing Snow and dealing ice-elemental damage to enemies. Nix focuses on a Commando role, although she does have Blizzara at her disposal. While Stiria cannot be targeted by enemies, she can still be damaged by area attacks.

Their Gestalt Gauge increases by driving up enemy chain gauges and by defending against enemy attacks as a Sentinel. In Gestalt Mode, the Shiva Sisters transform into a motorcycle Snow can ride, and Stiria's stats are used for the damage calculations.

Stiria has 3 ATB bars and Nix has 4. The Eidolon's rank is the sum of Snow's current Crystarium level and the number of roles Snow has advanced to level 5.

Against few enemies, Stiria attacks the enemy Snow is targeting with Blizzard and does nothing while her ATB gauge charges. For enemies with high hitboxes, she will use Blizzara, and for clustered or distant enemies, she will attack with Blizzaga.

If Snow is afflicted with a negative status, she casts Esuna. If Snow's HP is below 70%, she casts Curaga. If either his HP or the Eidolon's SP reaches 0, she will cast Arise before being dismissed.

Nix normally attacks the enemy Snow is targeting with Wheel Rap three times, followed by Flip Kick, Wheel Toss, or Wheel Grind. If there are many enemies close together, she will use Pirouette twice in succession. If the enemy resists physical attacks, she will attack exclusively with Blizzara. She also casts Blizzara on distant enemies.

If the enemy is staggered, she will use Flip Kick immediately if the enemy is not launched, then use Wheel Toss or Blizzara. While the ATB gauge charges, she closes in on the enemy she is targeting, and ATB Charge accelerates the charge rate.

Diamond Dust raises the chain gauge by a various amount based on level prior to dealing damage:[1]

Some of the Eidolons appear. 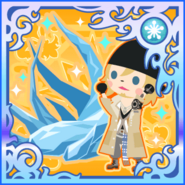 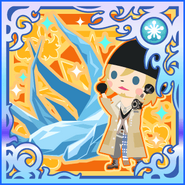 Stiria and Nix appear as enemies whose abilities may be imparted to the delegation's units as Soul Break skills.

Shiva-Ixion, a variant of Shiva based on the Shiva Sisters, appears accompanying Snow. She's one of the few Mirages that can't be imprisoned in any way. 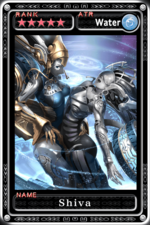 Manifest in the twin sisters Nix and Styria, this icy Eidolon sends shivers down enemy spines.

The Shiva Sisters represent the Farron sisters, Lightning and Serah.[2]

The Final Fantasy XIII-2 Ultimania Omega reveals scrapped plans for an extension to Snow's downloadable scenario episode, titled "Perpetual Battlefield". Alongside the existing part of the episode in the Coliseum, there would have been a separate minigame in which players would play as Snow as he rode through the Archylte Steppe and try to kill 30 monsters using Snow's skillset—which included being able to spin, drift, jump and use a water-based spell. Once this part of the DLC was scrapped, it was used as a base for the Chocobo Racing minigame in Serendipity.[3]

T-shirts with Eidolon designs have been on sale in the Japanese Square Enix store. The shirts cost ¥3,900, with two versions, Odin or Shiva. The Eidolons have also been made into action figures in the Final Fantasy Creatures Kai Vol. 3 series. These figures cost ¥6,240 a piece. Final Fantasy XIII -Play Arts Kai- Shiva Bike Action Figure Set with Nix and Stiria was released in November 2010 with the Shiva Sisters, which could either be assembled separately or into a bike as they appear in Gestalt Mode. 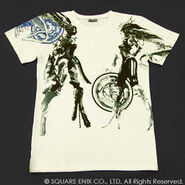 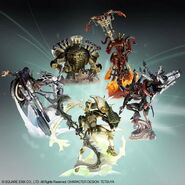 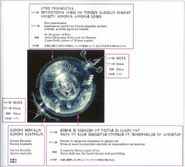 Snow with the Shiva Sisters. 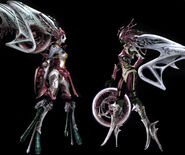 [view · edit · purge]The German Nix and Nixe (and Nixie) are types of river merman and mermaid who may lure men to drown, like the Scandinavian type, akin to the Celtic Melusine and similar to the Greek Siren. Nixes in folklore became water sprites who try to lure people into the water. The males can assume many different shapes, including that of a human, fish, and snake. The females with the tail of a fish. When they are in human forms, they can be recognized by the wet hem of their clothes. The Nixes are portrayed as malicious in some stories but harmless and friendly in others.