Shiva is a boss encountered in Final Fantasy X-2. She is fought on the road to the Farplane in Chapter 5.

Shiva, being the Ice aeon, is vulnerable to Fire. Nearly all of her attacks are Ice-elemental. Her ultimate attack, Diamond Dust is non-elemental and cannot be absorbed. Heavenly Strike halves HP and MP and causes Stop.

Using the Garment Grid Ice Queen or accessory with the Ice Eater auto-ability means the character will be healed by Ice attacks. It is useful to augment the party with Haste. Good dresspheres to use are Dark Knight, Black Mage, Alchemist, White Mage, Samurai, Berserker, or Warrior. Even without Ice Eater, the battle is not too difficult if Protect and Shell are applied on the party at the start of the fight. Flametongue and Firaga are good attacks to use against her.

Having Auto-Haste, Ribbon, or Ailment Def. is recommended to block the Stop effect of her Heavenly Strike attack.

Shiva can be added to the Fiend Arena during Chapters 2 - 5 by capturing a Flan Blanco with an S or SP pod, and raising it by 5 levels. Flan Blanco can be captured in the Moonflow, Bevelle, and the Calm Lands from Chapter 2 and Macalania from Chapter 3.

Shiva in the Fiend Arena is exactly identical to her Farplane counterpart.

Shiva appearing out of her glyph. 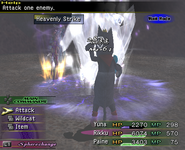