Shiva is a Summon Materia in Final Fantasy VII. It summons Shiva, who performs the attack Diamond Dust, an Ice-elemental attack that damages all enemies.

The Shiva Materia has the Ice element, which can be linked with the Support Materia Elemental.

Shiva is one of the available summons in the "Battle Square" demo version of the PC port.

The Shiva Materia is given by Priscilla of Under Junon during "The Stowaway Strategy" after defeating the boss, Bottomswell. If the player's Materia inventory is full during the scene Priscilla is supposed to give the Materia to the party, she leaves the Shiva Materia in her room for the player to pick it up later. 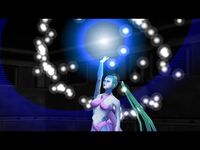 It is possible to duplicate the Materia by running into the guarded elevator just before the scene where Priscilla gives the Materia to the party. The guard tells Cloud off when the player approaches the elevator, and also when they talk to him normally; the goal is to trigger both text boxes simultaneously. The guard talks twice, but during the second text box, the player can move. Leaving the text box open, the player can talk to the old man pacing by the house below to stop him on his tracks and open his text box, and Cloud retains his ability to move.

With the old man's dialogue box open, the player can climb the stairs to Priscilla's house. She emerges, but her text box is cut off by the old man's text box. Skipping that, the player can again move Cloud, who should be positioned at the bottom of the stairs where he normally is for the cut scene where Priscilla gives the Shiva Materia to him. Closing the text box progresses the scene and Priscilla descends the stairs to give her gift to Cloud. Afterward, the player retains movement of Cloud; while the others are still talking, the player can walk off and enter the nearby house. Returning to the field, the scene where Priscilla gives the Shiva Materia to the party is still available, because the scene was previously left unfinished, allowing the player to gain multiple copies by doing the same scene multiple times.

Summoning Shiva costs 32 MP, and causes her to perform Diamond Dust to deal Ice-elemental damage equal to 1.5x the base magic damage on all enemies, which cannot be reflected. Early on, this can be a very powerful attack, especially against enemies that are weak to Ice, but it is also costly. Later on, however, Shiva is outclassed by more powerful summons.

Equipping the Shiva Materia comes with small stat changes of -2% HP, but +2% MP and +1 Magic. These changes are small enough to not be too detrimental to physical attacks, and compared to the Ice Materia, are the same without a Strength penalty. This makes Shiva a great Materia to link with the Elemental Materia on a weapon or armor. Linking the Materia on a weapon causes physical attacks to deal Ice damage, exploiting enemies' weaknesses to Ice, and linking it on armor will reduce, nullify, or absorb Ice damage based on the level. If used on weapons, it is a great choice given to characters with a higher Strength that are geared towards physical attacks: Cloud, Barret, Tifa, and Cid.

Shiva is the only purely Ice-elemental Summon Materia. It remains good when paired with Elemental, but the damage becomes outclassed by high tier Ice spells, such as Freeze or Ice3, when they are paired with Support Materia. Kujata and Typhon also deal greater Ice-elemental damage, though it is mixed in with other elements, meaning enemies weak to Ice may still resist the other elements.