Causes Ice damage to all enemies.

Shiva was an eidolon that manifested to protect the crystal of Gaia. The summoners have known of her for centuries, she is the first eidolon the summoner tribe discovered by documenting the world's legends,[1] and she appeared on a mural on the Eidolon Wall in Madain Sari, the summoners' village on the Outer Continent. When Shiva was discovered, she appeared as a young girl or a snow fairy, but her current incarnation was that of a grown woman because eidolons adapted their forms to the time and culture in which they appeared. As Shiva was the first eidolon the summoners ever called forth, it can be presumed she was the best-documented and most studied, and may have helped advance the summoners' understanding of the eidolons being born from the legends, and not the other way around.

Ten years ago, Garland ordered Kuja to destroy Madain Sari with the Invincible, killing most summoners. A young summoner girl and her mother escaped on a small boat, but the mother died during the long voyage to the Mist Continent. The boat was found near Alexandria, and the girl was adopted by the royal family as she greatly resembled the recently-perished Princess Garnet except for the horn on her head, which the king ordered removed. The girl had lost her memories during the voyage, and grew up as Garnet never learning she was adopted.

After the king passed, Queen Brahne became power-hungry and wanted to conquer the Mist Continent with the aid of eidolons extracted from Garnet and with a new army of black mages. Her eidolons stolen from her, Garnet escaped Alexandria Castle with her new friends and traveled to the Outer Continent to look for Kuja, who had supplied Brahne with the knowledge of eidolons and black mages. While on the Outer Continent, Garnet learned about her true identity and saw Shiva's as a mural on the Eidolon Wall.

Garnet became queen after Brahne perished in her battle against Kuja, and inherited the jewels into which her eidolons had been extracted. Receiving an opal from Doctor Tot, Garnet learned to summon Shiva.

Shiva is an ice goddess with a blue body clad in lingerie made out of ice. She wears a crown fashioned of ice crystals and what looks like blue silk gloves and socks, or, alternatively, body paint. A long veil extends down her back fastened with jewels or pearls at the tip. She has blue lips and eyes, an ice crystal or jewel on her forehead, white rings on her hands, and earrings the shape of snowflakes.

One Opal is obtained as part of the story from Doctor Tot after the party returns to Alexandria from the Outer Continent, and more are available from synthesis in Daguerreo, Black Mage Village, and Hades in the endgame (requires 100 gil, Ore, and a Potion). Opals can be found in the Forgotten Plains chocograph treasure (x14) and Cold Lagoon chocograph treasure (x9). They drop from Cerberus, Mover (also stolen from them), and Wraith (Blue).

The formula used to determine the amount of damage an eidolon does during its full animation is as follows:[2]

The Bonus in Diamond Dust's above damage calculation can boosted by 50% by equipping Dagger with Magus Hat, Barette, or Magician Cloak. Equipping multiple of these items at once does not stack.

Shiva is an especially useful eidolon against enemies weak to ice and magical damage in general. Summoning Shiva earns the You're Cold as Ice achievement in the mobile and Steam versions.

Shiva has an eidolon-type card for Tetra Master, which can be won from "Straight Shooter Shak" and "Eidolon Master" in the card stadium in Treno, or rarely from the Genome at the Black Mage Village entrance.

Hippaul has also hidden his Tetra Master cards at the top of the steeple in Alexandria. If the player looks there at the beginning of the game, they find generic monster cards, but if they check back later (but before Alexandria is attacked), they will find eidolon cards for Shiva and Ramuh. If the player doesn't check the steeple before progressing the story to the Treno card tournament, they will be lost, but the card players in the Treno tournament in endgame, and the card phantoms in Memoria, may still play them.

Shiva is the queen card in the blackjack minigame.

There exists an early concept art of Shiva in a more childlike appearance, or as a fairy. On the Eidolon Wall in the endgame, the player can unveil secret inscriptions that reveal that Shiva was the first ever eidolon the summoners discovered, and back then, appeared in a childlike form. 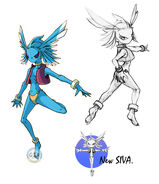