Final Fantasy Wiki
Register
Don't have an account?
Sign In
Advertisement
in: Characters in Chocobo Racing, Characters in the Chocobo series, White Mages, Chocobo to Mahou no Ehon: Majo to Shoujo to Go-nin no Yuusha Characters
English

Shirma is a young girl with pink hair with an ahoge, light skin, and eyes that vary from green to teal in color. As a White Mage, her outfit consists of a white robe or dress with a hood and red triangular patterns at the trims, matching boots with red tips, and a necklace with a jewel that varies in design and color.

Her appearance has differed in some games such as her skin having a more fair complexion, or her hair being a different color or shade of pink.

In Chocobo Tales, she wears a white romper with a hood and triangular patterns that are dark pink as opposed to red and a light brown rectangle design in the center, and black tights and short brown boots. Her hair is peach-colored and her eyes are light brown.

In Final Fantasy Fables: Chocobo's Dungeon and Chocobo Mystery Dungeon Everybuddy, she appears somewhat older. Her hair is a lighter pink, her eyes are a lighter green, and she has fair skin. She wears a white mage cloak with a hood as opposed to the dresses and robes she wore in most games with pink triangular patterns held by a brooch in the shape of angel wings with a blue jewel. Underneath she wear a black long-sleeved turtleneck top, matching tights, white shorts with what what appears to be a zebra pattern with brown folded ends and a black belt, and brown boots.

In Majo to Shoujo to Go-nin no Yuusha, she wears a hooded white mage dress with red buttons and a yellow bowtie along with black tights and short yellow-brown boots.

In Chocobo Stallion, she wears a white mage dress with puffed short sleeves and a collar along with a matching hat with a singular red triangle, fingerless brown gloves, and matching brown boots with white cuffs.

Shiroma is a White Mage who lives alone in an island near a village inhabited by non-human characters. Although she is despised for being human by most characters she meets, Chocobo instead appreciates her company. She has a small doll that she calls Kuz. As one of Chocobo's party members, she can heal his HP once per floor whenever Chocobo's HP turns yellow. She is also highly proficient with magic, having quite high magic levels when used by the player character. Her physical attacks are about average.

It is revealed that she is from the future, whose home was destroyed by Glass Goth.

In Chocobo's Mystery Dungeon: Every Buddy, she makes a cameo appearance in Chapter 3 with an optional dungeon for the player to clear. She is found at the Empty House in the Residential District. Completing her dungeon will unlock her buddy for use. She uses the same Cure spell that Shirma uses.

Known as White Mage, she rides the Cosmic Carpet. She lives in Mysidia, the land of mages and magicians. She was the one who told the story about the Magicite divided into eight Blue Crystals. Feeling responsible for her actions, White Mage followed Chocobo and its party. She has a more cheery personality than Shiroma does and is considered to be two different people.

White Mage uses the Barrier ability which protects her from the effects of the magical stones and some abilities. The Cosmic Carpet that she uses is slow, but easy to handle. Her theme is a remixed version of the "Town Theme" from the original Final Fantasy.

While still young, Shirma's mother and father were killed in a great war. Her mother told her that she should not be sad, and should always smile, no matter what. Taking this to heart, she gathered up some chocobos she found who had been scattered by the war, and took them to the Chocobo Farm on a far off island, away from the war torn mainland.

Here, at the farm, she lived with her Uncle Cid, taking care of all the chocobos. From time to time, she would gather them up and read them stories, along with the Black Mage Croma. Eventually, Cid left for the main land again, taking his new invention, the airship, with him.

During one of the story sessions, Croma brought along a dark tome, and with the help of Chocobo they unlocked the Darkmaster Bebuzzu. Shirma, Croma, and Chocobo managed to avoid getting sucked up into Bebuzzu.

Shirma now traveled with Chocobo, in the hope of freeing all the other chocobos. With Shirma helping, Chocobo was able to advance far, and restore all the crystals. However, with every crystal restored, the mysterious Irma would appear and let Bebuzzu absorb its energy.

The spirit of the water crystal, Leviathan, revealed that Chocobo, Shirma, and Croma were all descendants of the Warriors of Light who had sealed up Bebuzzu 400 years ago. After freeing the light spirit Ramuh, they find out Irma is the final descendant. Bebuzzu then appears, and explains that he had spared the four of them on purpose to restore the crystals. With the power of the four crystals, Bebuzzu leaves to the dark realm.

Unable to help anymore, Shirma stays behind to root Chocobo on. After defeating Bebuzzu once and for all, life returns to normal at the farm, and Shirma resumes her duties of caring for the chocobos. 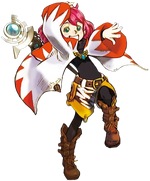 Shirma Magnolie is a kind-hearted White Mage who is a constant worrier and lives with her Aunt Stella at the farm at the outskirts of Lostime. Shirma does not like that the townspeople are okay with losing their memories, because she personally had precious memories she wanted to keep. She helps Chocobo in his quest to bring balance to the world and in facing the monstrous Destroyer.

Shirma is a mysterious girl who suddenly appears washed up at Million Island, she helps guide Chocobo as they explore the worlds of the picture book. She is also the hero of Cid's fourth picture book "The Girl Without a Name".

Shirma was to return as a racer, using her design from Final Fantasy Fables: Chocobo's Dungeon.

Shirma makes a brief cameo appearance in the DS version, fighting along side Sho Takeuchi, Sable, and Dancer, as a test of the game's battle system in the Developer's Office. Losing does not give a Game Over, and defeating the group gives no EXP, gil, or Items. They can be fought as many times as the player wishes.

In the event stage for the original Final Fantasy, the party shown in the battle scenes includes a White Mage named "Shiroma". 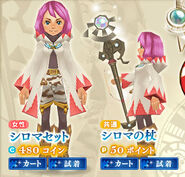 The White Mage who appears in Mario Hoops 3-on-3 and Mario Sports Mix, bears a great resemblance to Shirma. In the Japanese internal files, she's noted by the filename "shiroma". This suggests she could indeed be Shirma, however it isn't officially confirmed.

Shirma is voiced by Karen Strassman in the English version of Final Fantasy Fables: Chocobo's Dungeon. She is voiced by Erica Mendez in Chocobo's Mystery Dungeon Every Buddy!.

Shiroma with Chocobo in a FMV in Chocobo's Dungeon 2. 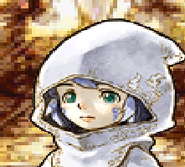 Shiroma as the Unnamed Girl on Chocobo Tales 2.

Shirma is a shortened form of Shiro Madoushi, "White Mage" in Japanese.