A katana that came from the faraway world of Vana'diel. The name "Shiranui" comes from a phantasmal light that suddenly appears over the eastern seas in Vana'diel. The blade of this katana is infused with that very light, and holds the power to trick the enemy's eyes to induce misses.

Shiranui (シラヌイ? or 不知火, Shiranui?, lit. Unknown Fire) is a recurring katana in the series.

The Shiranui is a weapon for Auron, obtainable when a 4-slot katana has no ability in it.

The Shiranui is a level 73 katana for Ninja that boasts 37 damage, 227 delay, +3 evasion, with the additional effect of adding Light Damage to attacks at night. It is dropped by the Notorious Monster Mother Globe.

The Shiranui appears a throwing weapon, having an attack of 20 and increases evade by 20%. It can be bought for 50,000 gil on the 40F of the Mysterious Lighthouse.

The Shiranui is a level 90 parrying armor that provides +66 Defense, +1 Attack, and BRV Boost on Block +4%. It can be obtained from the shop in the Labyrinth.

Shiranui is a Katana obtained during the Final Fantasy XI event, Shrine of Ru'Avitau. It provides 52 ATK and +5% physical evasion. 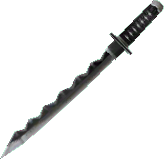 [view · edit · purge]Shiranui (不知火?, lit. unknown fire) is a Japanese term given to the optical or supernatural phenomenon similar to will-o'-the-wisp, often referring to fires seen out at the sea.