Shirahadori (also called Evade or SwrdGrab) is a Level 3 Samurai job skill that can be learned for 60 ABP. It gives the character a 25% chance to completely evade an attack before normal Hit Rate calculations begin.

Shirahadori is an enemy ability that pins down a single target with feathers.dditional Knockback and Bind effect. It is used by Yagudo Genja, Soo Luma the Ascended, and Maa Illmu the Bestower.

Shirahadori (also called Blade Grasp) is reaction ability for the Samurai learned for 700 JP. It lets the unit avoid any physical attacks easily, including, despite its description, arrow/bolt attacks (but not abilities that ignore Evasion; this glitch was not fixed in the remake).

This is widely-known as a highly unbalanced ability since its success rate is equal to the amount of Bravery a character has. Therefore, if a character with 100 Bravery equips Shirahadori, they will evade all physical attacks that do not ignore Evasion. When the A.I. deals with such absolute failure rate they will change their tactics to avoid this ability, or simply do nothing. If the player limits their Bravery at 97, enemies will try to attack even with a 3% chance to hit.

Originally translated as "Blade Block" and currently under its proper name, Shirahadori is a command ability for Galuf. With it, Galuf is able to evade most physical attacks for two turns. 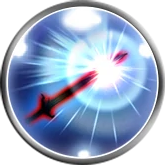