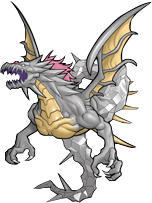 An ancient dragon dwelling in the Dimensional Rift. It often rains devastation on those who would destroy it, causing even gods to fear its strength.

Shinryu (神龍, 神竜, or しんりゅう, Shinryū?, lit. Shénlóng; spirit dragon, god dragon, divine dragon), also translated as Lord Dragon or Nova Dragon, is a recurring boss in the Final Fantasy series, and one of the hardest superbosses. It first appeared in Final Fantasy V as a powerful boss fought optionally in the final dungeon, and has since been featured in various forms in the series. Shinryu is associated with the powerful weapon Ragnarok, and sometimes drops it after being defeated. It is sometimes presented as a counterpart to another superboss, Omega. Shinryu has appeared as a summon, but he cannot be summoned by the player.

Shinryu is a mysterious entity with a crystalline body and known as a traveler of dimensions. He is linked to both the Interdimensional Rift and the Void, where he resides. Shinryu is often seen alongside Omega, another powerful superboss. It has been said Omega was created to destroy Shinryu, although the true nature between the two is unknown.

Shinryu tends to be found in treasure chests that guard the game's most powerful weapons, and prefers using a multitude of elemental attacks. 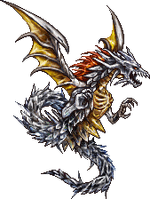 Shinryu appears with the same appearance as in Final Fantasy V in the Dawn of Souls, 20th Anniversary, and iOS and Android versions. It is one of the last two bosses in the Lifespring Grotto along with Omega.

Shinryu (Lord Dragon in the English WiiWare release and Nova Dragon in the The Complete Collection) is an optional boss in the Depths of the True Moon. It drops the Ragnarok after its defeat.

Shinryu is a monster-in-a-box in the Interdimensional Rift. It is tied with Omega for the most difficult boss. Its attacks are Water-elemental, and it offers the Ragnarok when defeated, which is the most powerful sword in the SNES and PS releases. In Final Fantasy V Advance, mobile and Steam releases, there is an even stronger version called Neo Shinryu who guards the new strongest sword, the Ultima Weapon.

A book found in the Interdimensional Rift mentions Shinryu arriving in the wake of Omega, and being sealed in the Void after the Sealed Weapons failed to destroy them.

Nova Dragon leads an army of dragons from Memoria, and must be defeated to enter the final area. Shinryu's character file in the original Dissidia Final Fantasy lists this as one of the character's appearances since it derives from the same Japanese name.

Shinryu is an Original Creation monster in the Monster Arena. It is a palette-swap of Evrae and is fought underwater; thus, only Tidus, Wakka and Rikku may face it. To fight it, the player must capture at least two Splashers, two Achelous, and two Maelspikes from the flooded portion of Gagazet Cavern. 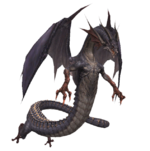 Shinryu is an evolved form of Abyssea's version of Promathia, serving as a Notorious Monster fought in a special battle within Abyssea - Empyreal Paradox. To fight him the player must defeat the boss of every Abyssea area and defeat all six Caturae. Notable drops include the Twilight Helm and Mail set, which when paired are the only items to grant a player the "Auto-Reraise" effect.

Shinryu is a primal introduced in the main scenario during the second portion of "The Far Edge of Fate" story quests. The Warrior of Light's party reactivates Omega to fight it. In Stormblood, it ends up under Zenos yae Galvus's possession and serves as the final boss of the main scenario.

Shinryu Celestia is a dragon form the l'Cie Celestia assumes. 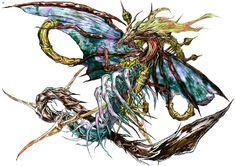 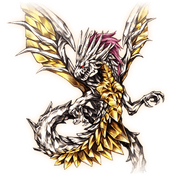 Shinryu is a special summon used by Chaos and cannot be summoned by the player. Unlike other summons, Shinryu can be summoned multiple times in the same battle, and uses several powerful effects borrowed from other summons.

Shinryu is a summon used by Chaos and Feral Chaos. It has the same function it has in Dissidia Final Fantasy.

Shinryu is the main antagonist and final boss of the main story campaign.[1]

A dragon which flits through dimensions in pursuit of Omega. Enemies drown in the face of its strength. It guards a legendary sword, but neither its treasure nor power offer any clue why it might lurk in a box...

Shinryu appears as a superboss.

Shinryu appears as an enemy in Battle Music Sequences.

Shinryu from Final Fantasy V appears as an enemy.

Shinryu is a boss.

Shinryu is one of the five promotional cards. In the Japanese and American versions, Shinryu must be downloaded from a download station. In the European version, the player simply has to enter the code Down, X, R, Right, A, B on the Download Pop-Up Card screen.

Shinryu in his Final Fantasy Trading Card Game appearance has a card.

This dragon boasts a strength that not even mighty heroes wielding the Sealed Weapons could hope to match.

Shinryu is one of the six dragon bosses that need to be defeated to get the keystones needed to unlock the Vampire Castle. It holds the light keystone.

This section about an enemy in Bravely Archive is empty or needs to be expanded. You can help the Final Fantasy Wiki by expanding it.

Yiazmat, a holy superboss dragon that first appeared in Final Fantasy XII, bears many similarities to Shinryu. Like Shinryu, Yiazmat is a holy dragon spoken of like a deity, is said to be the guardian of a powerful sword, and accepting the hunt for Yiazmat in Final Fantasy XII allows the party to fight Omega Mark XII; Shinryu and Omega are often depicted together as hunting one another. As Shinryu does not appear in games set in Ivalice, Yiazmat may serve as Shinryu's substitute among the enemy roster.