Rocket Town
The Shinra No. 26 is the rocket piloted by Cid Highwind in Final Fantasy VII. It was one of the successful rockets developed by Shinra's Space Exploration Department. Because of a mishap that occurred inside the rocket during the day of the launch, it was aborted. The site of the aborted launch served as a landmark years later for Rocket Town.

The text on the side of the rocket is "Shin-Ra Type 26" written in English. This remains in the model shown in Crisis Core -Final Fantasy VII-. The Final Fantasy VII Ultimania Omega lists its name as "SHINRA No.26" however.[1]

Cid was assigned as Shinra No. 26's pilot. When the launch time arrived, his assistant Shera noticed a leak in one of the oxygen tanks and stayed behind to fix it. The events unfold slightly differently in Before Crisis -Final Fantasy VII- where the rocket's sabotage was caused by the eco-terrorist group AVALANCHE, who sabotaged the rocket engines. In any case, Shera's presence in the rocket during launch caused Cid to abort it, crashing and damaging the rocket. Shinra abandoned the space project and Cid would blame the failure of his dreams on Shera and so treat her poorly.

Revealed in Before Crisis -Final Fantasy VII-, Rufus Shinra was the one who recommended the Space Program's cancellation, which was supported by the Shinra executives.

Later in Final Fantasy VII, Shinra plans to launch the Huge Materia with the Shinra No. 26 into space, right into Meteor. They hope the explosion to be great enough to destroy the Meteor to save the Planet. Cloud and his party fight through the Turk Rude and take control of the rocket. Palmer, the Shinra executive in charge of the Space Department, gleefully tells them the rocket is set to automatically launch, and launches them into outer space within the rocket.

Before the party can escape, the oxygen tank that failed Shera's inspection all those years ago explodes, pinning Cid under its debris. With Shera's help, the party frees Cid. The party flees in an escape pod. Before the party can leave, the last Huge Materia can be rescued from the rocket.

Whether or not the Materia is rescued, the rocket crashes into Meteor and creates a blinding explosion massive enough to be seen around the entire Planet. However, the Meteor is unaffected.

When the rocket is at its launch pad in Rocket Town, the exit on the left leads to the rocket's access platform.

The exit on the right leads to the duct that leads to Materia room. The exit at the bottom leads to a hallway.

The ladder leads up to the cockpit, the exit at the bottom leads to the Materia Room.

The ladder leads up to the cockpit hallway, the exit at the bottom leads to the Engine Room.

The ladder at the end leads up to the engine room duct, the exit at the bottom leads to the hallway to the escape pod.

Behind the door at the top is the escape pod. The exit at the bottom leads to the engine room.

The escape pod is found in the rocket, and is used to depart back to Gaia.

Code to the Huge Materia[]

To get the Huge Materia from the container, a code must be punched in. Cid will give hints as Cloud attempts to crack the code. If the player takes note of the hints the code can be solved before the timer expires. The actual code is:

If the player obtains the green Corel Reactor Huge Materia here, they will be able to synthesize Master Magic from it. If the player missed the Corel Reactor Materia by way of failing to catch up with the Coal Train, completing this mission will allow the player to obtain the Ultima Materia.

If the player obtains the yellow Fort Condor Reactor Huge Materia here, they will be able to synthesize Master Command from it.

If the player obtains the red Underwater Reactor Huge Materia here, they will be able to synthesize Master Summon from it.

If the player obtains the blue Nibel Reactor Huge Materia here, Bahamut ZERO will not become available at Bone Village after the Raid on Midgar, but they will be able to obtain Bahamut ZERO from the Huge Materia should they have Bahamut and Neo Bahamut in their inventory. Since obtaining the blue Materia grants no other utility, the player is better off missing it if they missed one of the Bahamut Materia.

A model for Shinra No.26 can be seen in the exhibition room in Crisis Core -Final Fantasy VII-.

One of the earlier test models for Shinra's space rocket can be seen in Sector 5 slums church, crashed in through the ceiling in both the original game

. In an optional dialogue onboard the Highwind before fighting the Diamond Weapon, Cid explains he heard it crashed in Midgar but was relieved to hear it did not blow up. A model for Shinra No.26 also can be seen in Cid's house along with an AK-47. 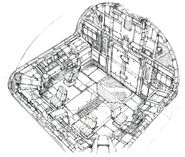 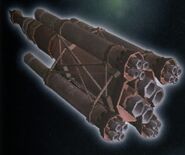 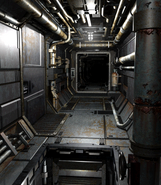 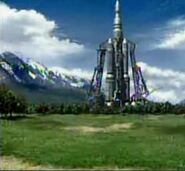 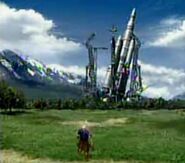 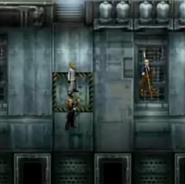