Shinra Manor, also known as Shinra Mansion, is a location in the world of Final Fantasy VII. It is an abandoned mansion on a hill on the outskirts of Nibelheim, and was once used by Shinra Electric Power Company researchers as a study, as well as a secret lab via a hidden passage in the basement. The mansion is most famous for its role in the Nibelheim Incident—in the mansion's hidden basement Sephiroth learns part of the truth about his origins and declares his vendetta against the planet.

Approximately thirty years before Final Fantasy VII, The Jenova Project began at Shinra Mansion. Two Shinra scientists, Professor Hojo and Dr. Hollander, began competing branches of the project to produce humans with the abilities of the creature Jenova, whom they believed was a Cetra. Hojo's plan included injecting Jenova's cells directly into the fetus of his child.

His lover and scientific partner, Lucrecia Crescent, consented to this, but the Turk protecting them, Vincent Valentine, objected. When he confronted Hojo about his plans Hojo shot Vincent. As told in Dirge of Cerberus -Final Fantasy VII- Vincent clung to life and Lucrecia implanted him with the Protomateria that could control Chaos to save him.

Hojo used this to conduct more experiments on Vincent, giving him the power to mutate his physical form. When Vincent awoke, the procedure on Lucrecia's child, Sephiroth, had been completed. Ashamed of his failure to protect her and of what he had become, Vincent went to sleep within a coffin in the basement to atone for his sins.

Twenty-five years later, the mansion is abandoned and overrun with monsters. Sephiroth comes to Nibelheim on assignment from Shinra, and enters the mansion after returning from Mt. Nibel. He locates the lab and isolates himself in the study for several sleepless days, reading the Shinra research notes on Jenova. His findings lead him to believe Jenova is a Cetra and himself to be Jenova's "son" produced from her genetic material.

Sephiroth storms out of the mansion and sets Nibelheim on fire before returning to Mt. Nibel to seize Jenova's remains from the mako reactor. In the ensuing confrontation between Sephiroth, Zack, and Cloud, Sephiroth is thrown into the lifestream and Professor Hojo takes Zack and Cloud prisoner. Hojo uses them as test subjects, and they are taken to the mansion's lab for experimentation.

Four years later, Zack awakens in his capsule and breaks free. Cloud, having been exposed to mako for a prolonged period of time, is catatonic, but Zack takes him along. He dresses Cloud in a spare SOLDIER uniform he finds in the mansion, and the two set out to escape Shinra.

Cloud mentions the manor in his detailing of the Nibelheim Incident. Cloud tells how Sephiroth found a secret basement where he stayed for three days, until the information he found there drove him insane.

Cloud and his party later return to Nibelheim, rebuilt to cover up Sephiroth's destruction and the true events of his death. It is entirely optional to enter the mansion, but in there the party can undertake a sidequest to recruit Vincent as a party member. In the basement lab the party finds Sephiroth, who invites Cloud to the "reunion" and flees.

On Part 2, after restoring Cloud's memories, he can return to the lab to experience a series of flashbacks that show how he escaped Shinra with Zack.

Vincent Valentine returns to the manor via the underground tunnels and sewers to search for information about Deepground and Lucrecia's research on Omega and Chaos. He revisits the experimentation room where he was turned to his monstrous state and the coffin in which he had slept.

In the mansion, Vincent finds a holographic recording of Lucrecia who gives him some information. He meets Deepground troops who had arrived in the mansion earlier, and fights a large spider mech in the entrance hall. Rosso extracts the Protomateria from Vincent and he is saved by Yuffie. By this time, the mansion is in ruins. 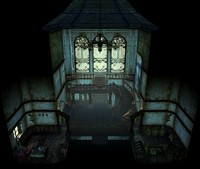 The Manor's foyer (top) and laboratory below (bottom).

The Shinra Manor is an abandoned, old Victorian-style building with an ominous look. A chandelier hangs from the ceiling of the foyer, and several large mosaic windows are dotted around the walls, giving the building an air of regality, while the laboratory beneath it is contained within stone walls resembling a cellar. The Shinra Manor is mostly devoid of technology, aside from that within the underground laboratory. The building is mostly worn down due to abandonment.

The foyer is attached to two rooms beneath it, and at the back is a door to several rooms as well as a staircase leading to its top floor. This is where an atrium, a safe room, and several bedrooms are located, with the bedroom on the furthest right end having a secret staircase leading down to the basement with both a dungeon and an underground laboratory that contains filled bookshelves as well as advanced equipment that glow neon.

The Shinra Manor, known as the Mansion in the menu, is first visited in Cloud's flashback during "The Tragedy of Five Years Ago". Here, the player controls Cloud as he looks for Sephiroth who pores through the books of the library to learn more about his past. At this time, no enemies are fought here, and there is little to be found.

When the party returns during "Unnatural Hometown", the Mansion has noteworthy optional objectives and random encounters. The party can recruit Vincent from the Mansion's basement by first defeating Lost Number by unlocking the safe within the Mansion by finding the blues to its code from around the mansion. Defeating him also earns Odin and Cosmo Memory. Visiting the basement during the party's first trip to Nibelheim triggers a short cutscene where the player earns the Destruct Materia. The player can also examine the piano to go over the key controls for it, but some of its keys are broken and there's no gain from playing it.

Returning to the basement after Cloud rejoins the party in Part 2 triggers another cutscene that has material reward, but which sheds light into Cloud's backstory.

In the next room the player can jump into the hole to discover the Mako point, and climb out on the ladder behind them. The player should then activate the switch to move the platform to get to the other side. Move further on and the player can go through the door on the left. Passing the vending machine and continuing down that route and the player can pick up a Limit Breaker, Machine Gun Bullets x70, and Handgun Bullets x60.

The player is given three minutes to deactivate a total of four mines. The player should move slowly around the area until they hear the beeping sound occur faster. When they move into its small radius they should move back and shoot the mine. If the mines explode without you shooting them, they do not count as a bomb deactivation. The fourth mine will drop the Cardkey whether the player deactivated all four or not.

Shinra Manor has four areas. The first and second floors, and the hidden underground cave, leading to the basement facilities.

There are two keyholes on this floor, and no items in Chapter 9. Heading up the stairs leads to the second floor.

In Chapter 10, there is a chest on the west of the first floor containing a Shinra BETA.

The western section of the second floor houses the locked safe. The eastern section houses a the secret door leading to the underground cave which can only be accessed after the story events on Mt. Nibel.

In Chapter 10 a chest in the upper room of the western section holds a Firaga. In the room opposite, the player can open one cabinet for 5,000 gil, and the adjacent cabinet for a SOLDIER outfit.

Entering here on Chapter 9 initiates the cutscenes with Sephiroth. The labs contain a chest with an Elixir.

The player starts in the labs in Chapter 10. From the fallen scientist, the player obtains the Dresser Key. On the central device in the room, the player can read a letter.

The study section has a chest containing 10,000 gil.

In Crisis Core -Final Fantasy VII-, the theme of the manor is called "The Ominous Mansion".

Imber Mansion, the location of the game's seventh chapter, alludes to Shinra Manor by featuring Vincent as a recruitable character and "The Nightmare Begins" as the background theme. 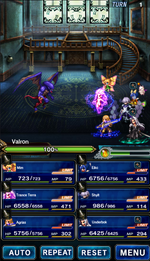 On the Final Fantasy VII: International bonus disc it is possible to view the messages Zack and Cloud scratched on the mako tank.

The books in the study and the laboratory in Final Fantasy VII form the letters "VII".

The scene of Cloud and Zack's escape from the lab in Final Fantasy VII was actually originally planned to be part of the game where Cloud and Tifa fall into the lifestream in Mideel; after washing ashore Tifa would perform CPR on Cloud and he would have the vision of escaping the Shinra Mansion with Zack. The scene was moved to take place as an optional scene in the mansion basement instead.[citation needed]

Unused text from the game suggests that the Shinra Mansion would have had scientific reports the player could inspect, but their contents do not exist in the script files. The titles of the reports would have been: Information concerning Materia/Hojo, Life of Materia, Legend of the Ancients, World Version, Next Quarter's projected Budget/Hojo, North Pole Daily Report/Hojo, and The Promised Land.[1] It is unclear whether these were meant for the flashback scene of Nibelheim's destruction or for when the mansion is visited later. 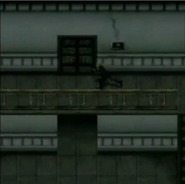 The manor in Before Crisis -Final Fantasy VII-. 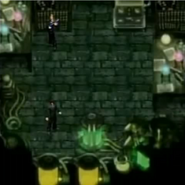 The laboratory in Before Crisis -Final Fantasy VII-. 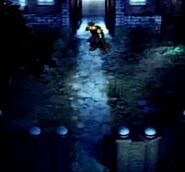 Zack leaving the mansion with Cloud in Before Crisis -Final Fantasy VII-. 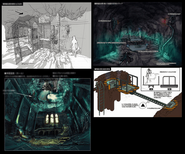 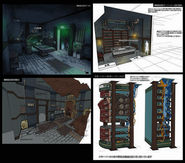 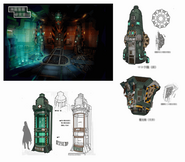