Shinra is a young Al Bhed boy who serves aboard the Celsius in Final Fantasy X-2. A technical prodigy, he designed the Garment Grid system and the CommSphere communicators, helps decode the various spheres the Gullwings locate, and designs a display sphere for Yuna's concert.

Shinra rewards the Garment Grid The End for completing the optional activity of recording visual data of the applicable monsters in the game in their Oversoul states for Shinra's Bestiary. Enemies encountered in Oversoul state are listed in red. 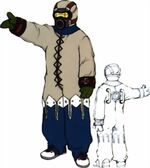 Like many character models in Final Fantasy X-2, Shinra is recycled from an unrelated non-playable character from Final Fantasy X. He wears a mask with an ochre visor, and a brown full-body suit with lime green mittens. His suit has a blue collar.

His visage under the body suit is unknown, and the Fiend Tale endings in International+Last Mission and later versions add a recurring joke on Shinra's mysterious nature as a person who never removes his bodysuit. In YAC-13's ending, he short-circuits when trying to analyze Shinra's gender. In Skink's ending, after failing to get a kiss from all the maidens he's approached, Shinra kisses him, but it's ambiguous if this cures his curse. In YAC-62's ending, he's about to reveal Shinra's secret, but Shinra shuts him down.

Although Shinra is intelligent and knows it, he is still very much a child and is often heard singing the Gullwings' theme song. When faced with a conundrum the others expect him to solve, he retorts with: "I'm just a kid!" Shinra cuddles up to Yuna on the eve of the final battle, like a child saying goodbye to his mother or elder sister.

Shinra works on board the Celsius as the Gullwings' technical adviser. He plays sphere videos on request. When Yuna and the party watch the Awesome Sphere stolen from Kilika, Shinra identifies Vegnagun as a weapon. Shinra builds the CommSphere communicator system and plants them wherever the Gullwings visit as a test. For Yuna's Thunder Plains concert Shinra builds a sphere display to broadcast it to the crowds, and tests his ChocoPorter invention on a chocobo. Following life on Spira from the CommSpheres, Shinra is disappointed to find many of them have broken for various reasons.

After helping discover the ways into the Farplane, Shinra examines energy readings and speculates it could be harnessed for Spira's benefit, although it would take generations. Prior to YRP's final battle with Shuyin, hugging Yuna while telling her to be careful, Shinra admits the mission to save Spira is his last mission with the Gullwings.

After landing in Besaid for Tidus and Yuna's reunion, the Celsius malfunctions and even Shinra is stumped on how to repair it. The Gullwings stay in the village, and later a man named Briar points Shinra out as a "Bedore" and tries to attack him. The Gullwings subdue him and tie him up at the Besaid Temple. Shinra is curious and asks Briar what a Bedore is, learning it is the ancient name for Al Bhed. Briar tricks Shinra into releasing him by promising to fix the Celsius, but as Shinra unties him Briar knocks him down and escapes.

Rikku comments that Shinra is now helping Rin on his machina projects. As revealed in Final Fantasy X-2 Ultimania, Shinra received financial support from Rin for his personal project to modify Vegnagun to confirm his theory of harnessing the Farplane's energy.

In the Fiend Tale storyline, while he was still a member of the Gullwings, Shinra studied the fiends. The reason remained a mystery to even the fiends themselves, who yet grew to respect Shinra for helping them cope with their current conditions. Shinra momentarily becomes a fiend himself while learning of the origins of the fiends that existed before life on Spira did and resided in the Fiend World. 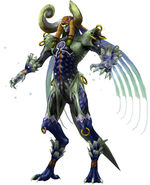 I think I'll give this fighting thing a try.

In the International and HD Remaster versions of Final Fantasy X-2, Shinra's research on Ultima Weapon and then Omega Weapon caused him to be consumed in the fiend's pyreflies and is transformed into the Almighty Shinra. The story behind it is that Shinra tried to manufacture the dark energy in the Farplane, and was possessed by Omega Weapon. When defeated, Shinra returns to normal.

Shinra appears with an Earth-elemental card.

Shinra is a boy who supports the Gullwings, the group which the main protagonist, Yuna, belongs to. He carries a name that gives him an association to the Shin-Ra Company, and he is researching a method that could utilize the energy of 'the life force that flows through our planet'. The results of this cannot be seen in FFX-2, but maybe one day his descendants will establish a 'company that supplies the energy of the planet'?

Kazushige Nojima has said the following:[1]

After quitting the Gullwings, Shinra received enormous financial support from Rin, and began trying to use Vegnagun to siphon Mako Energy from the Farplane. But, he is unable to complete the system for utilizing this energy in his generation, and in the future, when traveling to distant planets becomes possible, the Shin-Ra Company is founded on another world, or something like that....... That would happen about 1000 years after this story, I think.

In an interview with a French Final Fantasy website Finaland Nojima commented on the link thusly: "This story is a bit of a joke. When we created FFX-2, we wanted to create something, a totally new world. Except that when I created it, I realized that it looked a lot like FFVII... But without realizing it. Afterwards, when it was officially said in Ultimania, it took a completely gigantic proportion when it was just an anecdote."[4]

Shinra is voiced by Akeno Watanabe in the Japanese version and Pamela Adlon in the English versions.

Shinra's name is an allusion to the Shinra Electric Power Company from Final Fantasy VII. [view · edit · purge]In a March 4, 2020 interview, Yoshinori Kitase explained that the word "SHINRA" derives from the word "myth" in Japanese (神話, shinwa?) because SHINRA was about becoming god and controlling everything.