Inugami
Shinatsuhiko is a wind-elemental summon that appears in Final Fantasy Dimensions II. He is one of Morrow's early game summons and can only be obtained as a first-time completion reward for the "Restricted Area" side quest in the Future Shelter.

Shinatsuhiko's signet is adequate when it can be obtained, as he provides Morrow with a small boost in magic and speed. It teaches Morrow Aerora abilities, which is convenient ability when the signet can be obtained, as it allows Morrow to deal moderate wind damage and bleed to groups of enemies. However, the summon's worth is limited after Morrow learns its Aerora abilities, as the signet is easily outclassed by signets immediately available after, and its summon attack is useless against bosses.

In the original free-to-play versions, Shinatsuhiko could only be obtained through the game's summon draw shop and could be equipped by any party member.

The official description from the free-to-play versions describes Shinatsuhiko as the Lord of Wind whose protection grants increased speed. Shinatsuhiko is depicted as a young man garbed in purple robes wielding a bag of winds. As the signet evolves, his bag of winds grows larger and he becomes enveloped by blades of air. Shinatsuhiko's overall design is heavily inspired by the Pandemona Guardian Force from Final Fantasy VIII, who is another summon based on the Fujin deity. In addition, Shinatsuhiko's Tornado Zone summon attack was also Pandemona's summon attack in Final Fabntasy VIII.

Shinatsuhiko's summon ability is Tornado Zone when summoned into battle, which has a chance to inflict instant death to all enemies. Summoning Shinatsuhiko costs 3 bars from the summon gauge.

The following are the abilities Morrow can learn from Shinatsuhiko: 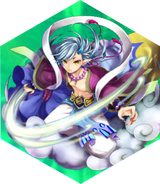 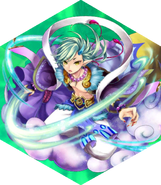 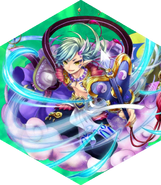 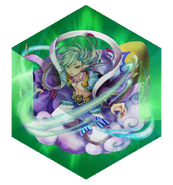 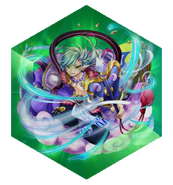 Shinatsuhiko is another name for the Japanese kami, or god, of wind Fūjin, as seen in his design depicting him using a bag to unleash his wind.

[view · edit · purge]Fūjin is the Japanese wind god. In Chinese Buddhism, a legend states that Fūjin and Raijin were originally evil demons who opposed Buddha. They were captured in battle with Buddha's army of heaven, and have worked as gods since then.