Shield is a spell that grants the Shield status to one ally, making them immune to physical and elemental damage. However, they can be still damaged by non-elemental magic or items. It costs 180 MP and comes on the magic materia Shield, but one must level it up by getting 10,000 AP for it before it can be used.

Shield is a command which allows aeons to reduce damage taken to 1/4 until their next turn, at the cost of not charging the Overdrive gauge. It is especially useful for when the player knows when a particularly strong attack is about to be used. Yojimbo and the Magus Sisters cannot use Shield, due to not being directly controllable.

While aeons may not typically take much damage from basic attacks, some enemies, such as Greater Sphere, can use abilities that deal a fixed percentage of a character or aeon's maximum life. Shield can reduce the damage of even these attacks, and can otherwise be paired with Protect or Shell to reduce damage taken to an eighth, making otherwise tough battles much more manageable for an aeon. Some attacks, such as the Cactuar King's 99,999 Needles, actually deal well over 99,999 damage and are thus too strong to be mitigated. 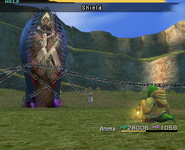 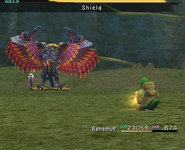 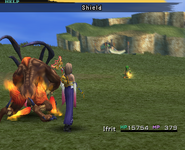 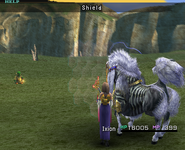 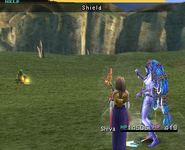 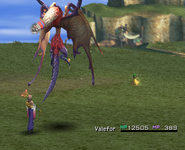 Shield is the unique ability of the Floral Fallal special dressphere, learned for 20 AP and costing 36 MP to cast, and can be learned after learning the ability Barrier. It nullifies physical damage done to Yuna herself, but not to the Pistils.

Shield is an enemy ability exclusive to Eald'narche. It increases his current BRV and bestows the Shield status effect on himself. 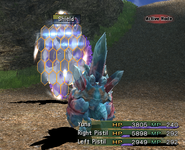