Cid Pollendina: Oh, shut up and help me remodel the Shera (airship) page!
Please expand this article into a full one. The following tasks need to be completed:

Cid Highwind
The Shera is an airship from the Compilation of Final Fantasy VII named by Cid Highwind in honor of his wife, Shera. It is the command ship of the World Regenesis Organization's (WRO) Airship Fleet. Shera can be seen as the spiritual successor to the Highwind from the original Final Fantasy VII. The same painting of a woman in a bikini that decorated the Highwind's wing can be found on Shera's main deck and at least one crew member from the Highwind has returned to man the Shera.

On board the Shera is a mostly glass main deck with computer consoles, a large computer inside with a link-up for Synaptic Net Dives into the Worldwide Network, an engine room, and an observatory on the main deck with holographic technology similar to that of Bugenhagen's observatory in Cosmo Canyon. The craft is built with a deck that can be opened and closed so that ground troops can spill out onto the battlefield riding airboards.

Although Dirge of Cerberus mentions the Shera was built by unknown builders long ago, On the Way to a Smile "Episode: Barret" and Final Fantasy VII: Advent Children -Reunion Files- both mention Cid constructing the Shera in Rocket Town. However, it may simply be that Cid found the Shera (or components of what would become the airship) built by the unknown builders, and then took it to Rocket Town to remodel it into the final airship. So far, no official explanation has been provided regarding the origins of the Shera.

The builders of the craft's engine are unknown, as it was not built by either the WRO, Shinra or any other known power. Actually it was discovered buried, abandoned by an unknown ancient civilization, possibly the Cetra. Most of the technology used on board has yet to even be properly tested, and remains waiting in boxes unused. Instead of Mako power, it runs on jet fuel made from oil.

The Shera does not play an important role in the plot of Advent Children, but it does make its first appearance here. Cid carries the playable characters of Final Fantasy VII into Midgar on board his new craft to watch the battle between Cloud and Kadaj, and afterward Cloud's battle with Sephiroth.

Following Deepground's attack upon the WRO Headquarters, Reeve Tuesti gathers up the WRO Airfleet to launch an attack upon Midgar, the seat of Deepground power.

With Cid recruited into the WRO, the Shera operates as a drop ship and the ship from which Reeve Tuesti directs his forces and Shelke the Transparent operates from during the Battle of Midgar. 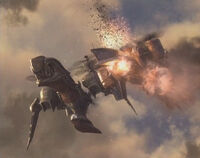 During the battle, it is hit by a rocket blast from Deepground forces, but it is undamaged. Shalua Rui's capsule is lost during the battle. Shelke, who was directing the WRO forces using a Synaptic Net Dive, is captured by Nero the Sable using his powers of teleportation to enter the Shera unnoticed. During the credits, it seems the Shera was either destroyed or at least badly damaged as the flight decks floor is visible behind Shalua's broken pod.

The bridge of the Shera is an open-spaced command center located at the front of the airship. The room is dominated by a viewport of reinforced glass that allows the pilots of the airship to see outside; with an elevated pilot/steering platform overlooking the room's entirety and viewport from the back of the room. On either side of the bridge are workstations containing various readouts and navigational arrays to aid in piloting the airship.

Located in the center of the airship, the vessel's sickbay contains a state-of-the-art recovery system and computer databanks to aid in the recovery process. During the Battle of Midgar, Shelke the Transparent altered some of the bay's computer banks to enable her to use her Synaptic Net Dive to reveal the entirety of Lucrecia Crescent's notes on Omega and Chaos.

In Dirge of Cerberus -Final Fantasy VII-, after Reeve Tuesti reveals his fifth Cait Sith robot while aboard the Shera, the robot says "Number 5 is alive!"; which is a direct quote and reference to the movie Short Circuit.

A 9.5" long replica of the Shera was produced as part of the marketing for Final Fantasy VII: Advent Children. This toy was referred to as its Japanese name "Sierra". The replica is made by Kotobukiya and sculpted by Takayuki Takeya. 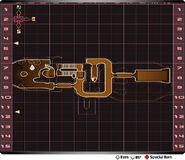 The Shera map in Dirge of Cerberus -Final Fantasy VII-.