Tetsuya Nomura
Shera is a non-playable character in Final Fantasy VII. She is a scientist who once helped out when the Shinra planned the launch of the first rocket to outer space in Rocket Town. She lives with Cid Highwind, though the two are not married in Final Fantasy VII.

Shera is a slender woman with hazel eyes and auburn hair. She wears light brown pants girded with dark brown belt, a yellow sweater, white socks, and dark brown shoes. She also wears a white lab coat and round glasses.

A prominent trait of Shera is her overcaring nature which was influenced by a past event of her life. Despite the hardships that followed the event, she is still a caring person.

This section in Before Crisis -Final Fantasy VII- is empty or needs to be expanded. You can help the Final Fantasy Wiki by expanding it.

Shera was a scientist in charge of getting the rocket Shinra No. 26 into space. However, when doing final checks before the launch, she noticed a fault she felt the need to fix. Right before the launch, Cid discovered she was still in the hold fixing the fault and was faced with a hard choice: either launch the rocket and burn her to a crisp, or abort the launch, and fail in fulfilling his dream. Not wanting to kill Shera, Cid aborted the launch. Shera then takes the blame following the event.

Shera, feeling she owes Cid for saving her life, lives with him, and handles all his constant criticism, feeling that she deserves it. When Cid finally launches the rocket, he realizes there actually was a fault with one of the oxygen tanks, leading him to forgive Shera after all these years.

On the Way to a Smile: Case of Barret[]

It is revealed that Shera has contracted Geostigma on the back of her hand. Although it is not ever said whether she was cured of the Stigma, Cid's reference to her in Dirge of Cerberus -Final Fantasy VII-, seems to imply that she is, in fact, still alive.

Though Shera doesn't appear, Cid has named his new airship, the Shera, after her.

During the Deepground/Omega crisis, as chronicled in Dirge of Cerberus -Final Fantasy VII-, Cid has married Shera, though when this happened is not specified. If Vincent talks to Cid while on the Shera before the Midgar assault, he tells him that "Shera's been worried about you, and you know how she gets", in referencing to her overly cautious and meticulous nature. 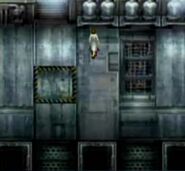 Shera in Before Crisis.