The first prince of the Zoldaad Empire, and the young man next in line for the imperial throne. Shera is a kind soul with sound judgment who has his doubts about the current militaristic aspirations of the empire. Unfortunately, his quiet personality and high regard for his subjects' well being are regarded as nothing more than weakness in the eyes of the dictatorial emperor and his militant officials.

Shera is a supporting character in Final Fantasy Brave Exvius. He is the Crown Prince of the Zoldaad Empire, being the son and heir apparent of Emperor Sozhe.

Unlike his militaristic father, Shera is a rebel sympathizer, partly due to his connection to Jake and partly because of looking after his people's wellbeing. Shera has a maid, Amelia, who faithfully serves under him, along with a cadre of individuals collectively known as Shera's Commandos.

Shera is a young man with fair skin, brown eyes, and long white hair tied in a ponytail. He wears a red militaristic coat with a black light mail underneath tied with a belt. He wears black bracers on his arms and a pair of white gloves. He uses white pants and a pair of black boots. In combat he uses a regular-sized sword with a curved blade in the middle section, similar to that of his father but smaller in size.

I am prepared for what must be done. I cannot look away. Not if I am to help lead this country to a new future.

Shera is a kind, caritative and caring soul, always thinking on the happiness and well being of his people. Although young, he takes his position seriously and constantly thinks on the state of his nation and how to guide it to prosperity and as peacefully as possible. He is keen and observant, being vigilant of his father's sudden change of behaviour and the influences behind it. Shera is close to Wilhelm, with the general seeing him as a son of his own while Shera confides with him many things.

Shera's kindness is a double-edged sword, as many nobles in his nation see it as a weakness to govern Zoldaad, but at the same time it draws many staunch supporters who hope for him to improve the nation in opposition to Sozhe's more militaristic approaches. While Shera often questions his own ability to govern, he trusts and is trusted by several individuals who do the best for him. Shera in turn is shown to be supportive and loyal as he sends in help for Rain and his friends.

Shera was born to Emperor Sozhe and the empress about twenty years before the game's events. Unbeknownst to the public, Shera was Sozhe's second son, as the emperor had had an illegitimate child, Jake, a few years before. In order to prevent Jake's existence from creating ambiguity to Shera's claim to the throne, Jake was sent away from Zoldaad, but Shera came to know the truth at some point. Shera also grew close to General Wilhelm, Sozhe's long-time friend. Wilhelm saw the young prince as a son of his own and often provided advice and a listening ear.

At some undisclosed point in time, Shera was given assistance of the former mercenary turned personal maid Amelia, who takes care of his present needs and also serves as his confidant. Amelia's descriptions reveals that, as a mercenary, she once fought alongside Jake but that, upon his request, she accepted to handle Shera's protection from the shadows.

When Dr. Lazarov arrived and began to negatively influence Sozhe, Shera distrusted the scientist. As the nation began to decay into disarray as a result of Sozhe's militaristic agenda, Shera viewed this with worry and secretly opposed his father's approach. At the same time, Jake returned to Zoldaad and created the Raven rebel army to halt Sozhe's tyranny. Sharing Jake's ideals of freedom, Shera began to support the rebellion from the shadows.

Shera once admitted to Amelia that he is not strong enough and that he needs people to help him, and so asks Amelia to recruit capable people for the sake of Zoldaad. Amelia hires Camille, Ilias and Fohlen, who serve as her scouts,[1] but who ultimately follow Shera's will.

Shera accompanied General Wilhelm during his journey by train to Zoldaad's borders after his recent discharge due to Lazarov's influence. During the journey, Shera shares his worries with the general, stating how the country has progressed technologically but that the consequences of said progress are too harmful, and that he suspects Lazarov to be somehow responsible for his father's changed demeanor. Wilhelm responds that he can only trust in Sozhe's judgment as he has always done. He lets Shera know that he is aware he has been supporting the rebels, leaving Shera surprised, but Wilhelm simply asks Shera to be a good emperor before parting ways.

By the time the Sworn Six of Paladia sought to destroy Zoldaad's Fire Crystal, Shera is seen as weak by his own father and the empire's more militant officials, but has actively been working towards Zoldaad's freedom. In fact, his alliance with various people behind the scenes to insure the happiness and wellbeing of his people (such as his half-brother Jake) leads to his arrest on charges of treason.

Confined to the castle's dungeons, he is rescued at Amelia's behest by the party (Rain, Lasswell, Fina, Lid, Nichol and Jake), after being placed behind bars by Lazarov as per Jake's infiltration plan. Shera shares with them his belief that Lazarov is the true mastermind behind Zoldaad's politics, and accompanies them on their search for both Sozhe and Lazarov to take them down.

The scientist flees while the party fights Sozhe until he is defeated, and comes to his senses as he dies. He encourages Shera to follow a better path than the one he did, and entrusts Zoldaad's people to Shera, who accepts, and Sozhe dies. Shera then leads the party to Lazarov's laboratory, but leaves the fighting to them. However, Lazarov manages to escape aboard the Invincible.

Afterwards, Shera has Amelia inform the party of an old hangar Lazarov could be using as a hideout to repair the Invincible, after the airship was blasted by Bahamut's Megaflare. The party pursues Lazarov into the hangar and then into the Invincible itself, defeating him for good. In the aftermath, Shera is crowned Emperor and meets with the party. He vows to re-establish friendly talks with other nations and hires Evan as an engineer and advisor. Shera offers Jake the opportunity to stay in Zoldaad, but he declines, as Jake permanently joins Rain's party in their journey to save the remaining crystals.

Later on, when the party travels to Gronoa, upon Shera's request, Amelia's scouts Ilias and Fohlen, go after the party in order to aid them. Their timely arrival allows the party to survive the deadly miasma due to Ilias' medicinal herbs and slave-making skills.

Shera can be summoned to play either in his original "Shera" variant (3-5★), or his crowned variant "Emperor Shera" (5-7★). In both variants he is a rather weak physically-geared attacker as he is more of a support-type unit. He has many abilities related to the Fire element, but no Black Magic. He can equip daggers and swords, along with light shields, hats, clothes, light armor and accessories. Emperor Shera has a wider equipment selection: he adds greatswords, katanas, bows, hammers, guns and maces, as well as helms. 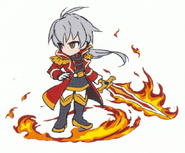