Shemhazai is a boss in Final Fantasy XII fought in Giruvegan. She is an Esper, and defeating her unlocks her license on the License Board. In the Zodiac versions, she is also fought in Trial Mode Stage 39 where the Treaty Blade (uncommon) and Dawn Shard (rare) can be stolen from her.

Scion that is both horse and woman, wielding utter control over the souls that wander the underworld, in opposition to the Martyr Igeyorlm, scion of light. Though she once served the gods as a guardian, when Ultima announced her rebellion, Shemhazai went to her, whispering of the gods' hidden weaknesses. She then descended upon the land without leave of the gods, and taught men of destruction and evil. For this was she stricken down and bound.

Shemhazai has a random elemental weakness. At the beginning she likes to cast Silencega or use Syphon to drain about 20–30% of a character's MP. Shemhazai's attacks consist of magick and standard attacks, but her standard attacks have a high chance of inflicting Disease and Silence and dealing critical hits (Espers can't do combos; Shemhazai's critical rate is especially high). She also likes to use Shock and Flare.

When her health depletes about 40%, Shemhazai will ready Chain-Magick, which cancels her magick charge time. During this time, she likes to blast high-level Black Magick spells.

Having Shell helps. It is advised to use non-elemental weapons. By luck, one can squeeze in a Dispel before being inflicted by Silence. Shell can be used to reduce the rate of being inflicted with statuses, and the party can use Rose Corsage to protect against Silence and have Serums (Vaccine) ready for Disease.

If the player has a low enough level character, the Accuracy underflow bug can be used to continuously inflict Immobilize on her, making the battle trivial. 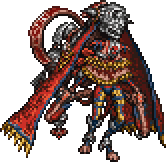 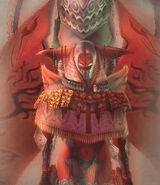