Scion that is both horse and woman, wielding utter control over the souls that wander the underworld, in opposition to the Martyr Igeyorhm, scion of light. Though she once served the gods as a guardian, when Ultima announced her rebellion, Shemhazai went to her, whispering of the gods' hidden weaknesses. She then descended upon the land without leave of the gods, and taught men of destruction and evil. For this was she stricken down and bound.

Shemhazai, the Whisperer is a level two Esper in Final Fantasy XII. She is fought during the main storyline in the lowest reaches of Giruvegan.

The Esper of Soul, Shemhazai represents the zodiac sign of Sagittarius, the Archer. Shemhazai's hands resemble crossbows, she has horse-like qualities and from her power of soul, her color sign is pink. She is also referred to as the Dhanus Ascendant, which is the Sanskrit name of its zodiac sign as used in Jyotish (Hindu) astrology.

Shemhazai is based on a Scion from Final Fantasy Tactics A2: Grimoire of the Rift. She returns in Final Fantasy XII: Revenant Wings as a Rank III Lightning Melee summon, although she is referred to as being male.

Shemhazai is found in the lowest reaches of Giruvegan, just before the warp point leading to the Occuria, in the Gate of Fire. It can be assumed they sealed her here to protect them. Shemhazai is the third of the five Espers obtained during the main story.

After being fought as a boss during the main storyline, her license can be purchased on the License Board for 50 LP.

Esper licenses sometimes unlock licenses that could not otherwise be reached. Shemhazai's license will appear on all boards, but once chosen by a character, will disappear from all other boards. In The Zodiac Age version, the player can choose two license boards for each playable character, and activated licenses are activated on both boards if present.

Shemhazai allows access to the following licenses on these boards:

Unlike other Espers, Shemhazai uses a crossbow for her basic attacks, allowing her to attack from a distance but also giving her a chance to miss. She also has a small chance of inflicting Disease. 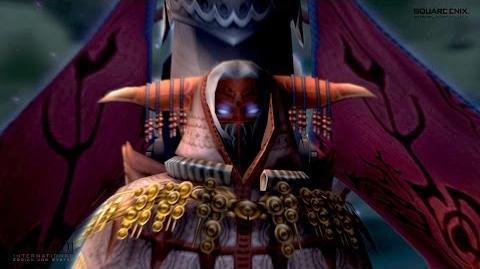 A non-elemental attack. Its damage is calculated just like the item Knot of Rust:

Damage is capped at 9999 in the original version. To improve damage, the player can cast the Bubble spell on her.

A non-elemental attack, and Shemhazai's ultimate attack. Shemhazai walks to the top of a cliff under the moonlight. She charges her guns, jumps off the cliff, shooting the enemies in range with pure soul energy. She lands near the enemies, and the soul energy that struck the enemies charges up into multiple explosions. Damage is calculated just like the item Dark Matter:

Its damage cap is 60,000, only bested in potential power by Zeromus's Big Bang, and is one of the only attacks that breaks the damage limit at all in the original version. Once used, the damage is set back down to 0, and has to be built up again. Unlike most other Esper attacks, Soul Purge is unaffected by Reverse.

Shemhazai is weak against Fire and takes normal damage from every other element.

Shemhazai is a boss fought in Giruvegan. Shemhazai has a random elemental weakness. Her attacks consist of magick and standard attacks, but her standard attacks have a high chance of inflicting Disease and Silence. She also likes to use Shock and Flare. When her health depletes about 40%, Shemhazai will ready Chain-Magick, which cancels her magick charge time. During this time, she likes to blast high-level Black Magick spells. 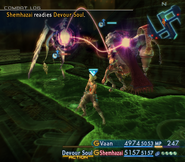 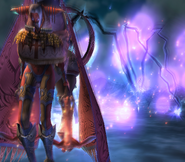 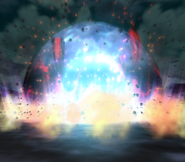 Shemhazai is derived from the name of the fallen angel, Samyaza. [view · edit · purge]Samyaza is a fallen angel of apocryphal Jewish and Christian tradition that ranked in the heavenly hierarchy as one of the Watchers.

She is also referred to as the Dhanus Ascendant, which is the Sanskrit name of its zodiac sign as used in Jyotish (Hindu) astrology.